Madeline Tafoya (1912-2002) was known for her carved and polished pottery.  This is one of her classic pieces in both form and design.  The piece was made in 1976.  The bowl is oval in shape and fully polished on the inside.  It is carved around the outside with an avanyu or water serpent design.  It is in excellent condition with no chips, cracks, restoration or repair.  It is signed on the bottom in the clay, “Madeline T.” 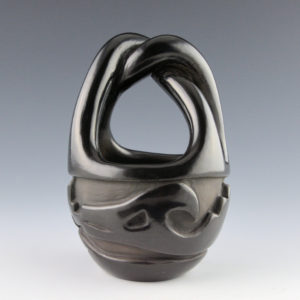 Madeline Tafoya (1912-2002) was a daughter of Sylvania Naranjo and a granddaughter of Santana Gutierrez (a sister of Geronimo Tafoya).  She was the mother of Thomas Tafoya, Laura Pino, and Leona Trujillo.  She was known for her traditional style black-on-black and carved pottery.  She learned to make pottery from her aunt and grandmother.  In her lifetime, she won many awards from the Santa Fe Indian Market, and the prestigious Governors Award.