This is one of the few wedding vases made by Dora Tse-Pe.  She learned to make pottery from her mother-in-law Rose Gonzales and continued her work in a similar style of cameo carving. This vase has a water serpent (avanyu) carved around the shoulder of the piece.  There is a single inset piece of turquoise for the eye.  It is fully polished, as is the lower half of the wedding vase. The two spouts are slipped with a micaceous clay.  The contrast of the matte and polished surfaces work perfectly on this jar.  It is in excellent condition with no chips, cracks, restoration or repair.  It is signed on the bottom in the clay, “Dora of San Ildefonso, 1990”. 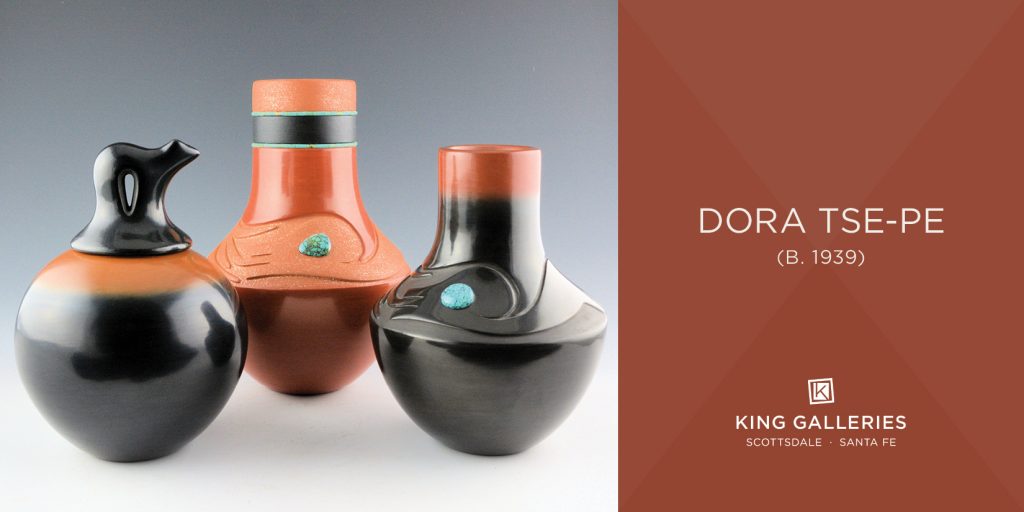 Dora Tse-Pe learned to make pottery from her mother-in-law Rose Gonzales. She began making her own pottery in the late 1970's. Her work continues to be inspired by the shapes and styles of Rose's pottery yet with Dora's distinctive high polish. Her pottery is signed on the bottom in the clay, "Dora Tse-Pe". Dora has won numerous awards for her work at Santa Fe Indian Market and the Heard Museum Indian Fair and her pottery can be found in numerous books, including "The Art of Clay" and "Legacy of Generations".