As a collector, I can say in all honesty that I never know what type of art will attract my attention.  Lately, I am mostly drawn to abstract works rather than those that are representational.  When the 2014 Cape Dorset Annual Print Collection was released (the highpoint of the year for collectors of Inuit prints) I surprised myself by choosing four works by three artists that each, in its own unique way, portrays the Arctic in the 21st century.  The theme of scenes from daily life has been a mainstay of Inuit creativity.  Inuit customs have long been a subject for Northern Native artists but often representations depicted life as it was lived on the land in the past.  Though many things have changed in the Arctic, the forces of Nature are a constant and remain a part of the contemporary Inuit experience that is also reflected in art.  Annie Pootoogook led the way in creating works that reveal Inuit life today rather than the world of her parents and grandparents and other artists of her generation, such as Shuvinai Ashoona, Kudluajuk Ashoona and Cee Pootoogook, continue to approach the subject with new insights.  Although the ages of these artists range from late forties to early and late fifties, they are among those regarded as the “third wave” of Inuit graphic artists and the first generation to deal with contemporary life in their art. 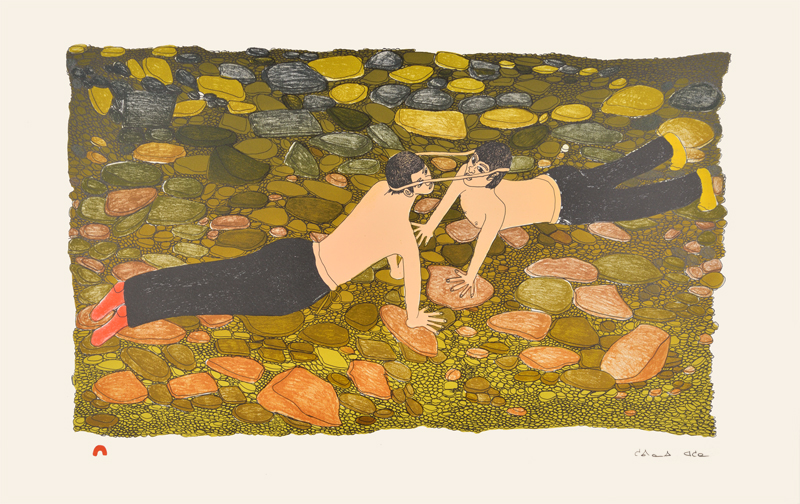 From the first time I saw examples of Shuvinai Ashoona’s art I was immediately intrigued and over the years I have acquired many of her prints and drawings.  I have never been disappointed because the artist’s unique perspective always yields surprises.  Some of her works resemble a mix of Rube Goldberg and the surreal; others are filled with her own bizarre and very personal symbols.  Often displaying a dark sense of humor, even Shuvinai Ashoona’s more representational pieces have a touch of the surreal, often tinged with nostalgia and an obsession with detail.  Head Pull is one of the artist’s representational images but Shuvinai, as most gallerists and collectors refer to her, adds a touch of surrealism, humor, nostalgia and obsessiveness to the mix.

The head pull is an actual Inuit athletic event that was played during the long, dark Arctic winters.  It was one of a series of games and activities that helped Inuit people remain fit but it also afforded entertainment and drew people together.  Traditionally a sport for men, the head pull involves two competitors lying belly down, face to face with a line between them.  A canvas loop (in modern times a leather thong, belt or elastic band) is placed around the men’s heads just above their ears.  The two players then rise to a push up position with only their hands and the tips of their toes touching the ground or floor.  Pulling back with their heads and bracing themselves with their hands and feet, they attempt to pull their opponent over the center line, get him to lower his head so the loop comes off or cause his body to touch the ground.  The game is still played today as part of the Arctic Winter Games held every two years.

Shuvinai shows us this athletic event from her idiosyncratic point of view.  There is no other Inuit artist quite like her.  At first, the image appears to be simply a realistic rendering of a particular event.  However, a closer reading reveals much more.  The viewer’s attention is immediately caught by the two shirtless male figures dressed identically, except one man is wearing light red socks and the other gold socks.  These two colors are repeated in many of the stones that divide the page diagonally, visually indicating that the two men are, literally, on opposite sides.  It is another example of Shuvinai’s wry sense of humor.  There are more red stones than gold ones, leaving us to wonder if the artist is slyly suggesting the winner of the match.

The print’s many rocks and stones have been produced with an almost manic attention to detail; even the smallest pebbles are finely delineated.  Such artistic meticulousness combines with the artist’s use of a soft color palette to create a somewhat surrealistic and nostalgic tone.  Although the head pull is still part of Inuit culture, Shuvinai is acutely aware that it must compete with introduced sports as well as the Internet, TV, electronic games and other contemporary distractions.  As a work of art, Head Pull appears to be a realistic work but it is, in fact, subtly non-realistic. 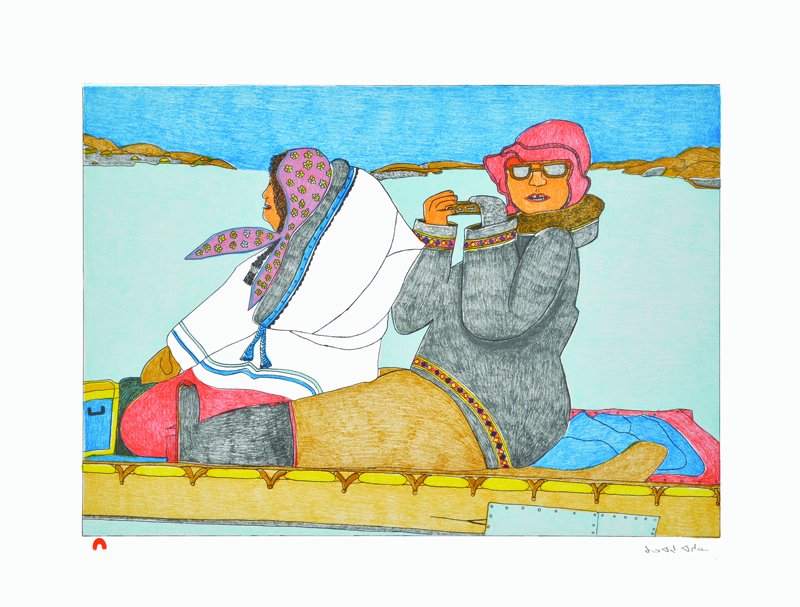 Because she only seriously started to create art about four years ago, I was totally unaware of Kudluajuk Ashoona’s work until I saw a preview of the 2014 Annual Cape Dorset Print Collection in August of that year.  (The collection is released each October.)  Snapshot and Northern Exposure, two lithographs that are highly detailed figurative works, immediately caught my eye.  Although she is a relative newcomer to the Cape Dorset graphic arts program, Kudluajuk has a distinctive style that is visually bold.  In an interesting reversal of roles, it was the artist’s daughter, also a graphic artist, who inspired her mother to draw.  At the time, Kudluajuk was in her early fifties.

Kudluajuk Ashoona is fast becoming known for works that are both representational and narrative.  Snapshot is just such a piece.  The print portrays two women on a pleasant outing.  Both women are similarly dressed.  The one on the left is wearing trousers, an amautiq (the traditional long-hooded Inuit parka), mittens and a brightly colored scarf.  Her companion is dressed in a different style parka, mittens, trousers and boots.  However, in addition, she sports sunglasses, a floppy hat and a camera.  This figure looks boldly out at the viewer, turning the cultural tables.  Usually Inuit people are the objects of a photographer’s attention, especially since the dawn of the tourist era.  However, although the woman could be pointing her camera at something we, the viewers, don’t see, the illusion is created that we are the ones who are the focus of her interest.  In addition to dispelling the misconception that the Arctic is a perpetually monochromatic world, Inuit people are presented from an Inuit perspective.             The artist’s strong use of blue throughout the print – in the water, the sky and on the skin boat – suggests that the two women are happy contemporary people in spite of living in one of the world’s most challenging environments. 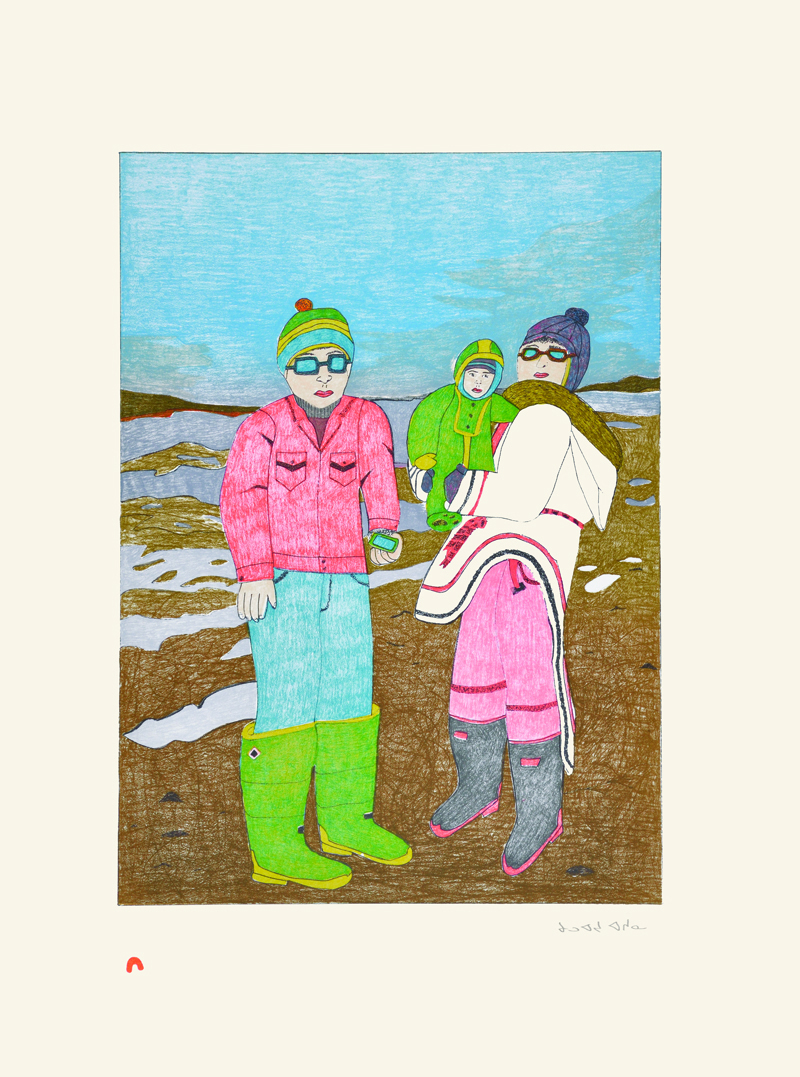 Like Snapshot, Northern Exposure portrays Inuit people as individuals who are clearly a part of the 21st Century.  The three figures look out at the viewer as equals, rather than as ethnographic curiosities.  Wearing clothing that is a mix of traditional and contemporary, the three figures in this print stand in an Arctic landscape in which most of the ice has melted, indicating that it is most likely late spring or early summer.  The work’s title suggests that the artist’s intention is to expose the outside world to contemporary Inuit life since most collectors of Inuit  art are located in southern Canada, Europe and the United States.  The three figures appear to be a man and a woman with a child.  However, they could just as easily represent two female friends and a child since all three have red lips, suggesting lipstick.  More likely, the red lips are indicative of exposure to the cold, again re-enforcing the work’s title.  The clothing of the three individuals is precisely depicted.  The Inuk on the right wears a white amautiq with a fur lined hood, pink trousers, black rubber boots and two non-traditional items – sunglasses and, what appears to be, a knitted cap.  In her arms the woman holds a small child dressed in a green snow suit.  The other Inuk wears a knitted cap, sunglasses, light red jacket, jeans, and green rubber boots.  Once again Kudluajuk Ashoona has created an accurate and colorful portrait of contemporary life in the Arctic. 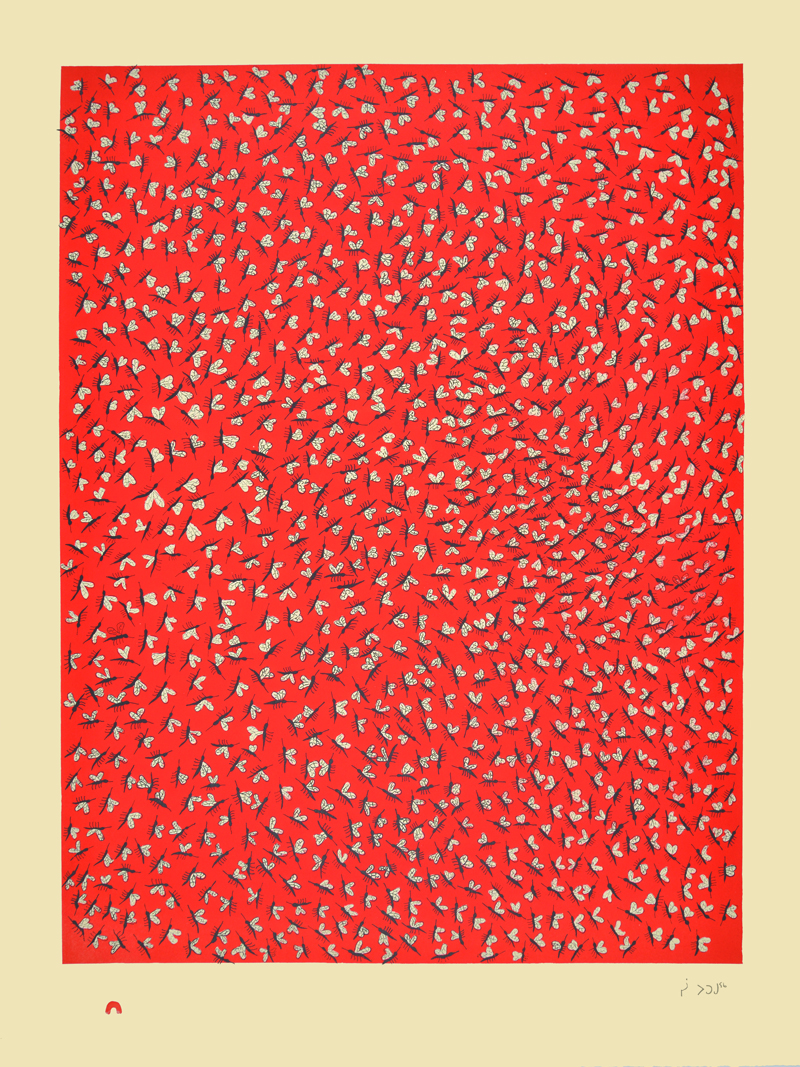 Unlike Head Pull, Snapshot and Northern Exposure, Mosquitos by Cee Pootoogook contains no human figures.   Nonetheless, it depicts an inescapable fact of life in the Arctic: each spring millions of the insects hatch, becoming a torment for humans and animals alike as well as a food source for thousands of birds, many traveling great distances to partake of the feast.  Up close, Mosquitos is a highly detailed representational work.  However, at a distance the scores of mosquitos take on a decidedly abstract quality.  The artist’s use of a red background adds a wry sense of humor to the print since mosquitos feed on blood.

For the past several years, Cee Pootoogook has concentrated on drawing and sculpture, focusing on images of Arctic wildlife and scenes of everyday life.  Although he comes from an illustrious artistic family – he is the grandson of Pitseolak Ashoona, eldest son of Napatchie Pootoogook, elder brother of Annie Pootoogook, nephew of Kanangiank Pootoogook and cousin of Shuvinai Ashoona and Siassie Kenneally – Cee Pootoogook clearly sees the world in his own unique way.

Cape Dorset graphic artists work side by side at the artists co-op, known locally as the Kinngait Co-operative, rather than in isolation.  The artists help, inspire, and also influence each other.  Non-Inuit refer to what they produce as art but there is no such work in Inuktitut, the Inuit language.  Isumanivi, meaning “your own thoughts” is just one of many words Inuit use to describe what we call art.  In the 1950s, when the first generation of modern Inuit artists were given paper they wondered what they should draw.  They were told, “Whatever comes to mind,” or insumanivi.  Shuvinai Ashoona, Kudluajuk Ashoona and Cee Pootoogook have all put their “thoughts” on paper, each using a distinct visual style, continuing what earlier generations had begun.