Because his art shatters stereotypical preconceptions, many collectors are surprised to learn that Glen Nipshank is Native American.  They are equally surprised that his tribal affiliation is Big Stone Cree since most collectors of Native American ceramic art predominantly collect works by Pueblo artists.  Nipshank explores form, color and shading in his ceramics, most of which are purposefully asymmetrical.  His references to his cultural background are rarely obvious but, rather, subtle and understated.  This makes his pieces particularly attractive to those who do not necessarily specialize in collecting work produced by contemporary Native artists.  Considering the quality of his pieces and, in many cases, their size as well, the work of Glen Nipshank is astonishingly affordable.  Mr. Nipshank continually explores and expands his medium, forcing collectors, curators, and museum-goers to reconsider preconceived notions about art produced by contemporary Native artists.

As with the work of many contemporary artists, I first became aware of Glen Nipshank’s ceramic creations through “Changing Hands: Art Without Reservation,” curated by David Revere McFadden and Ellen Taubman.  In 2005, Nipshank’s work was featured in the second installment of this three part groundbreaking exhibit. 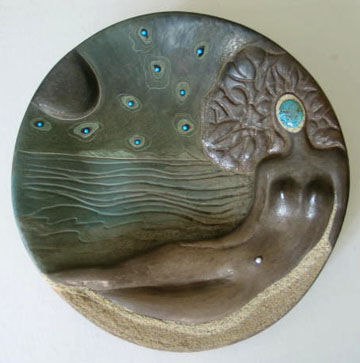 Mr. Nipshank draws inspiration from many sources.  Among the artist’s most fascinating creations is a series of plates depicting a nude female.  These works are a departure for the artist both in form and subject matter.  Most noted for his decidedly non-traditional ceramic vessels, the artist began exploring the human form in what has been called his “human suggestive” pieces.  His mermaid plates take the experiment further, combining abstraction and representation in the same work.  I first saw a group of plates that was to become part of Glen Nipshanks’s extended Mermaid Series in 2008 and was able to acquire one.  Some of the mermaids in the series have tails, others do not.  Although the body is sculpted, the face is represented by a piece of turquoise as are the stars in the night sky.  With flowing hair, the mermaid rests on a sandy micaceous beach, her back to the sculpted waves.  According to the artist, the piece was inspired by two sources.  The actual figure of the mermaid is based on a woman with flowing hair named Laura.  Turquoise is her birthstone.  The other inspiration was a story his mother told him when he was a child.   He said that when his grandmother was around ten years old she saw mermaids at a lake called Wabasca.  One of the creatures gave her some pearls and told her to wear them all her life which she did.  The pearl in the mermaid’s navel in some versions of the plate is an allusion to this story. 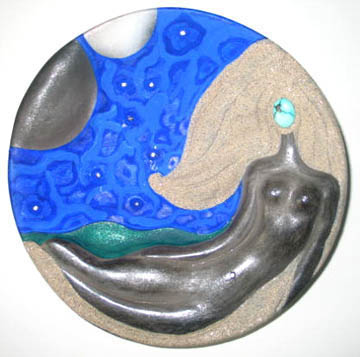 The next time I encountered the mermaid she had taken on a completely different guise – acrylic colors!  In the intervening two years, the artist had taken the concept of his mermaid to another level.  As in earlier versions, the piece mixes both the abstract and the representational and, as always, Nipshank had selected the perfect stone for the mythical being’s face but now, in addition to acrylic paint, the artist had added diamonds – for stars in the sky and, more importantly, for the mermaid’s nipples.  This daring innovation heightens the eroticism of the piece.  Also, in this newest plate the mermaid’s hair and the sand beneath become one so that the viewer is not sure if she has just risen from the water or is lying on her own long, sensuous hair.

Although the artist has told me that he has tried more than once to leave this subject behind, Nipshank seems to be under the spell of the siren’s song and periodically returns to this series, producing   variations on the theme. 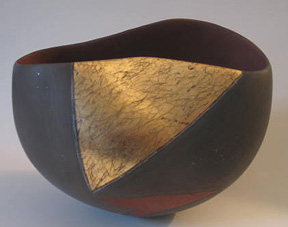 Some of the asymmetrical pieces are simple but oddly shaped.  Others seem to swell and dip in ways that suggest waves.  Whether small or monumental in scale, each work is bold, and arresting.  It is simply impossible to walk by these creations and ignore them.  Although shape is, perhaps, the first thing one might notice regarding Mr. Nipshank’s asymmetrical pieces, their coloration is also striking.  Some are pure white, some have a micaceous slip with sgraffito markings and others, of various colors and hues, others are decorated with markings of gold leaf and a number bear fire clouds, the result of wood firing.Among Nipshank’s most popular pieces are those that are decidedly asymmetrical.  Such works are rarely produced by Native artists since it is generally symmetry rather than asymmetry that is highly valued.  Mr. Nipshank’s asymmetrical works are breathtaking.  The artist dares to push his medium to its limits, leaving the viewer to marvel and wonder how much further he will be able to go.

Many of Mr. Nipshank’s pieces are delightfully whimsical.  Somewhat abstracted sea creatures are a motif he returns to frequently as are swirls both of which are incised into the clay and filled with “Granite Stone,” a textured commercial acrylic paint used on ceramics.

As a theme, the Four Directions is one that Glen Nipshank has returned to on numerous occasions.  The cardinal points are sacred to Native Americans but the concept is accessible to non-Natives as well since everyone is familiar with north, south, east, and west though we might not assign them spiritual significance.

The Cree perceive the Four Directions clockwise – east, south, west, and north – following the sun’s course.  Each of the Sacred Directions has specific associations: the Sacred North with birth, spring, air and the color yellow; South with adolescence, summer, earth, and the color red; West with adulthood, autumn, water and the color black; and North with old age, winter, fire, and the color white.  The symbolism of the Four Sacred Directions is an essential part of Cree religious belief and many of Mr. Nipshank’s works are imbued with the spirituality of his Native American heritage though he approaches the subject in continually fresh ways.  Sometimes each direction is represented by a different abstraction, sometimes as individual faces or masks, or as four painted panels. 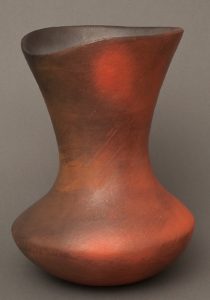 Often Mr. Nipshank opts for classic shapes that simply hint at his asymmetrical penchant.  In such pieces it may only be the vessel’s lip that is off center and the work is decorated with “fireclouds,” which the artists calls “smoky thunderclouds,” that are produced by wood firing.  Nipshank employs a double firing process: pieces are first fired in a kiln (something very rare for Native ceramic artists) to dry them thoroughly and then they are pit fired using wood as the fuel.  The second part of the process is creatively risky since the smoke that is produced to decorate the piece can only be partially controlled.  However, the traditional firing results in bursts of color and a dramatic sense of movement. 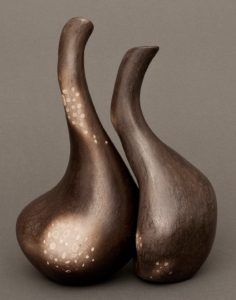 Mr. Nipshank often creates works that have come to be known as “human suggestives” since their shape references the human body.  Most of these works focus on the female anatomy but some consist of two pieces as in Marriage Pair.  Such works may be a response to the wedding vase, an introduced form that has now become thought of as traditional.  The vases are often given as wedding gifts because they have two spouts connected by a handle or bridge, suggesting that two have become one.  Mr. Nipshank expresses a different view of marriage in his work: two vessels that are closely aligned but remain individual and can be separated.  As for the decoration on the vessels, the artist stated, “The etched circles are like looking through a telescope and there is the Universe!”

Glen Nipshank has created a rich and diverse body of work.  The forms he creates are daring, often using asymmetry and monumentality for dramatic effect.   His pieces are so sensuous and sculptural that it is hard to resist touching them.

Perhaps the most exciting aspect of Mr. Nipshank’s art is that it is constantly surprising.  The only thing one can expect from him is the unexpected.  He has a restless creative spirit that is constantly inventive, experimental, and audacious, making his work exhilarating to see.