Susan Folwell began her journey into a Native re-interpretation of the Taos Society of Artists in 2017.  Since then, the work has found its way into museums from the Eiteljorg Museum permanent collection to an exhibition at the Harwood in Taos, New Mexico. This show continues this provocative and thoughtful journey.  “Canvas to Clay, Pueblo Perspectives” is an online exhibition at King Galleries that will transform into an installation in our Santa Fe gallery throughout the summer of 2020.

The Taos Society of Artists was formed in 1915 and disbanded in 1927.  These painters were attracted to Taos, the light, the people, and the culture of the nearby Pueblos.  During the twelve years of its existence, there were 12 active members which included: Bert Phillips, Ernest Blumenschein, Irving Couse, Henry Sharp, Oscar Berninghaus, Herbert Dunton, Julius Rolshoven, Walter Ufer, Victor Higgins, Martin Hennings, Kenneth Adams, and Catherine Critcher.  It is from this extraordinary group of paintings, in both public and private collections, which Susan draws for her clay work.

The continuing significance of this work is to see the concepts filtered through Native eyes and perspective.  It’s social commentary in clay, often capturing what makes the paintings of this group so renowned, and then giving it a modern spin.  As has been written about Susan Folwell, her, “intricately designed pottery is like reading a book, as each piece must be turned, examined and viewed from different angles to understand the whole story”.  That may well sum up how this show is best seen, as each piece is turned and viewed as a painting, finding the right light and angle, not only of the art but of its extension of this story into the future. 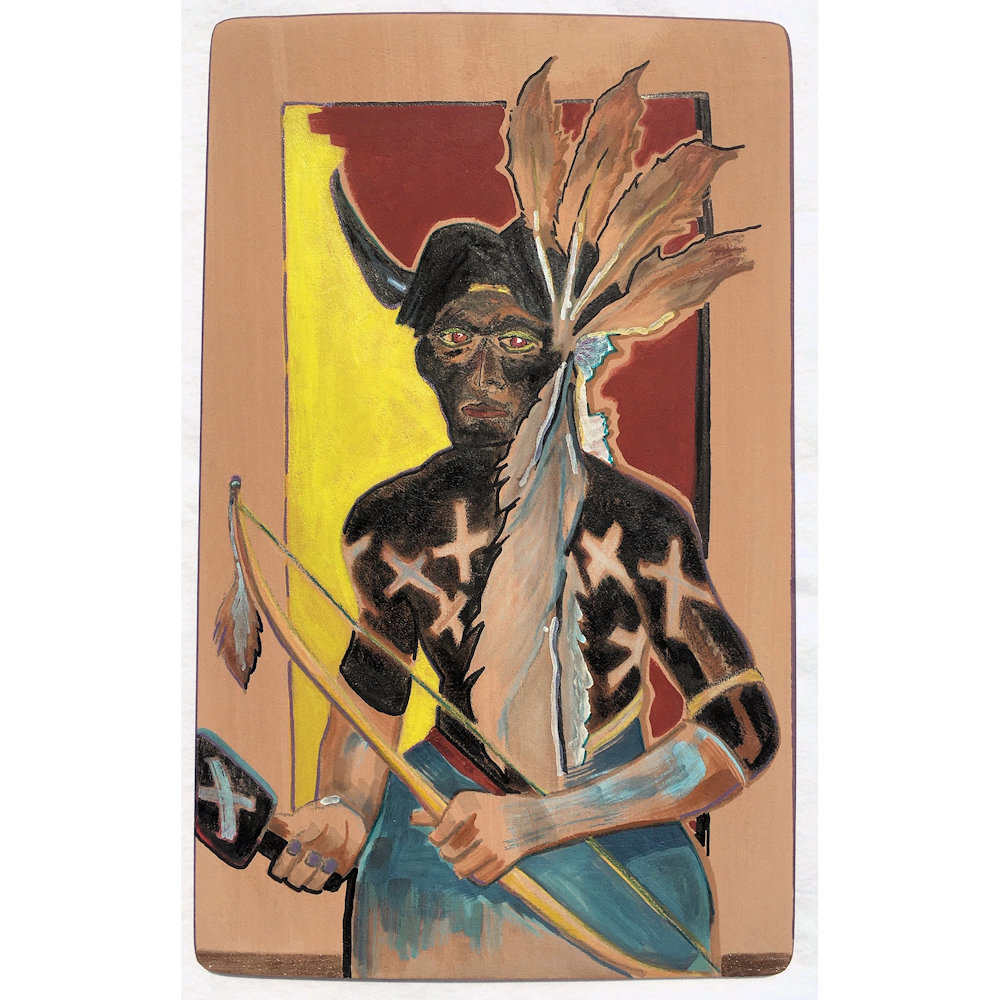 “Interestingly, Randall Davey was not a member of the Taos Society of Artists but he worked in the Taos area.  He only did a few paintings with Native subjects.  This painting of the Buffalo Dancer just caught me!  It has a very modern style in color and composition and especially the texture of the dancer. The paint on the body and the face..that’s what I wanted to capture!  I managed that with a combination of colored wax and underglaze chalk which is fired into the piece.  I then finished the tile to create more texture on the surface.”

“I made this piece for the exhibit at the Harwood Museum in Taos.  It was meant to sit next to a painting by Oscar Berninghaus.  The original painting is pastel, which gives it a happy vibration despite the rabbit.  I decided to make a clay “sack” as if the rabbit was inside.  When the piece is turned around there is a small suede leather patch that appears to be “sewn” onto the sack.  It’s actually where the hole is for the bowl so that it will survive the firing!”

“The composition for this tile came to me when I was thinking about current world events.  I wanted to choose two separate images that would work together.  They seem connected and yet there is a subtle solitude in different situations.  While the tiles are separate pieces I painted the landscape so that it would cross between the two tiles to create balance.  If you look closely, I also added some of Victor Higgins iconic clouds to the piece.  Look closely behind the woman on the left and where there would be a pile of adobe bricks in the background in the painting, I’ve created a group of clouds floating to the ground”.

“What attracted me to this painting was the striking look of the twins.  They were the Baumgartner brothers who relocated to Taos.  I appreciated the painting captured the essence of the time they lived.  I wanted to do a flask as the shape to accentuate the landscape.  The first piece I made using their image is now in the permanent collection of the Eiteljorg Museum.  I wanted to make a second piece, with a very square-shaped flask.  It’s as if the water has spilled out and the reflections are seen in the clay (water).  Creating a group with so many pieces makes it impactful and kinetic.”

“I love Victor Higgins nude studies.  The original of this is a watercolor and I wanted to somehow capture that feeling in the clay.  There is a distinctive sense of composition that goes with the nude.  Look around her.   There is an amazing amount of detail.  That’s why I added the clouds, giving her the appearance of resting under a cloudy sky.”

“This bowl is an important piece to me right now seeing everything going on in the world around me.  I saw this painting by Couse which is a beautiful image of a man leaning over his fire in a very pensive, prayerful position.  I imagine all the little squares around him and on the back of the bowl, are all prayers.  Prayers for everyone and the world around us.  As for the rim, it’s the first time I have attempted something so complex.  I have an “inspiration board” at home and there is a picture of a piece by potter Grace Medicine Flower.  It is inspired by her and her pottery.  I carved the rim while it was leather hard and then finished up the refinement of it after the firing. It adds its own gracefulness to the piece.

look forward to adding more pieces to this exhibition throughout the summer of 2020.