Tina Diaz (b.1946) and her sister Linda Cain (b. 1949) are two of the seven children of potter Mary Cain (1915-2010).  They are granddaughters of Christina Naranjo (1891-1980) and great-nieces of Margaret Tafoya (1904-2001).  Such a distinguished family linage would make one think they would be bound to more traditional pottery shapes, designs and imagery. However, for over 30 years they have been among a set of quiet and unassuming yet very innovative potters at Santa Clara.

I find Linda’s shapes exciting, especially her twist on the cylinder shaped jars when she makes them into boxes with flat sides.  Her ability to balance matte and polished areas in order to accentuate her designs is a rare skill among potters.  Beyond the obvious, there always seems to be a story or thought behind her work that makes me want to learn a bit more about how she came up with the shape or decided on the particular design.  Nothing seems arbitrary and they remain engaging over time.

Tina has become one of the best polishers of the “tan” color at Santa Clara.  She has been refining her technical process for years and now it is an integral part of her design color scheme.  The background which surrounds the carved and polished areas remains one of my favorite parts of her work. Weird, I know!  But she rounds out the background instead of leaving it flat like virtually every other potter and it’s unexpected how strong the shadows often appear from these rounded areas and they draw the eye and accentuate her designs.

The pottery of both sisters also offers a bit of surprise when I first see a piece.  Something unexpected and fresh, which when you see as much pottery as I do, is definitely a plus!  While they have been at this for years, it seems as if they are both reaching a new level in their work, a newly reinvigorated sense of design and precision that adds a new level of “surprise” to each piece. While I say it about a lot of young potters, I would say it about these two talented sisters…they are definitely two potters to continue to watch! 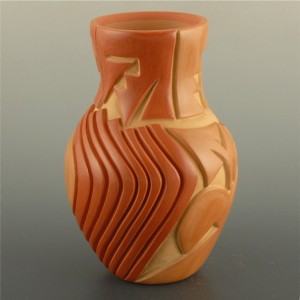 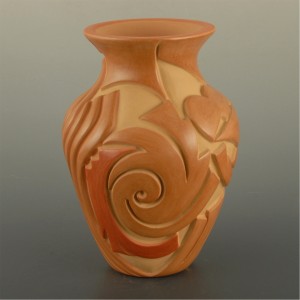 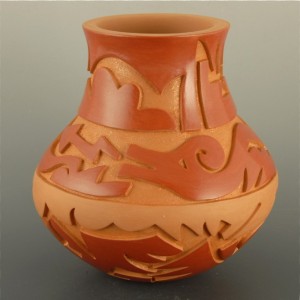