Early in 2016, Jason Garcia E-mailed me, writing that he was in the process of beginning a series of prints about the 1680 Pueblo Revolt and asked if I would be interested in acquiring each work as he created it.  This was certainly an ambitious undertaking and, at the time, it was not clear how many pieces would be produced, though eventually the series consisted of seven prints.  By the time I attended the Santa Fe Indian Market that summer all of the prints were in my collection.  I was totally unaware that Jason Garcia had entered them in competition until I learned that he had won that year’s Best of Classification and Best of Division Awards at the SWAIA Santa Fe Indian Market. 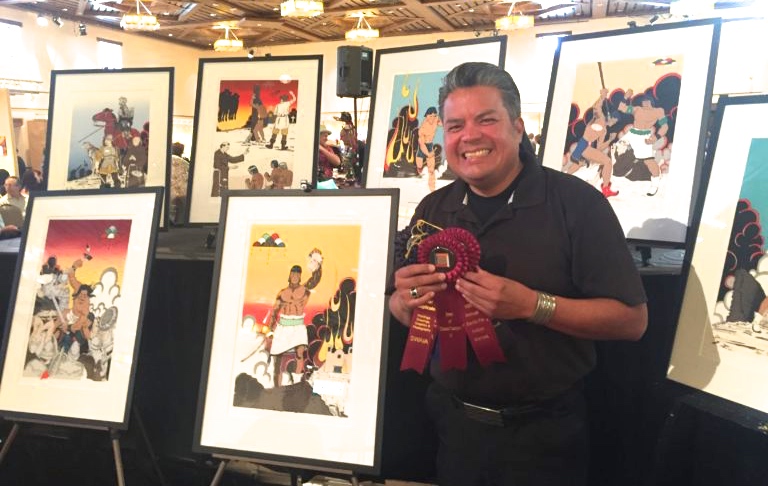 For those who are not Native American, it may be difficult to understand why those who are, particularly Pueblo people, remain passionate about the Pueblo Revolt of 1680.  For them, it is an open wound – a reminder that their independence and all that that entails was stripped from them, not once but twice.

Beginning in 1540, the pueblos of Santa Fe de Nuevo México had been subjected to the intrusions of Spanish soldiers, missionaries, and settlers, resulting in violent clashes.  The Puebloans were pressed into service to build missions, forbidden to practice their religion, and pressured to convert to Catholicism.  The Pueblos were forced to supply the colonists with labor, ground corn and textiles and were prevented access to fertile farmlands and water supplies.  Most abhorrent to the Pueblo people was the attack on their religion, especially the outlawing of Katsina ceremonies.

Any resistance was met with brutal force.  A revolt at Acoma Pueblo In 1598, which has come to be known as the Acoma Massacre, resulted in the

death and enslavement of hundreds of the pueblo’s inhabitants and the sentencing of all men twenty-five and older to have their foot cut off. 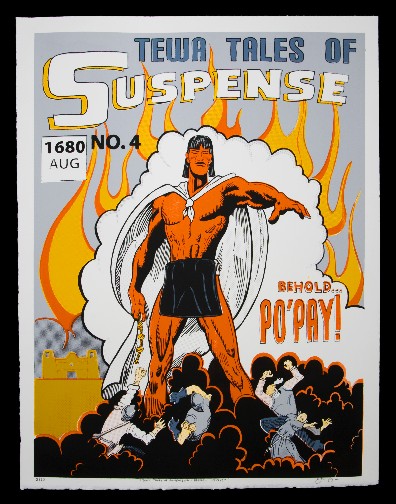 In the 1670s the situation was exacerbated by drought, famine and increasing raids by the Apache.  When forty-seven medicine men were arrested and accused of sorcery in 1675, Pueblo leaders had had enough and marched with their warriors on Santa Fe.  Since so many Spanish soldiers were away fighting the Apache, the Governor had no choice but to release the prisoners, among them Po’Pay (also written as Popé) who, five years later, led the revolt against the Spanish. 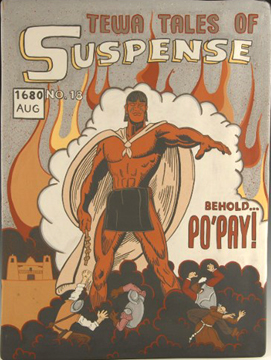 Also known as Po’Pay’s Rebellion, the revolt in 1680 involved most of the pueblos in Santa Fe de Nuevo México.  The plan was simple: on a specified day at each pueblo, the people would rise up and kill or expel their overlords.  Runners carrying knotted cords were sent to all the Pueblos.  Each day one knot would be untied and when the last knot was undone all of the Pueblos would act in unison.  All of the Spanish settlements in New Mexico were destroyed, 400 Spanish – men, women and children – were killed, among them twenty-one of the thirty-three Franciscan Missionaries in New Mexico. The missions were burned and 2,000 survivors escaped to Santa Fe.  Some went south to one of the pueblos that had not participated in the rebellion and eventually fled the province.  The revolt lasted from August 10 to August 21, 1680. 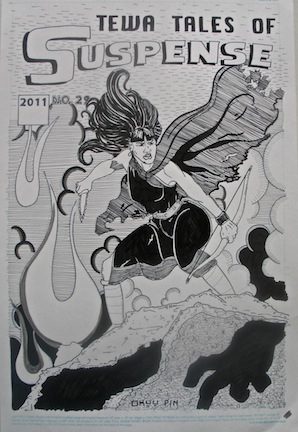 Pueblo Independence was short-lived.  Twelve years later, in August 1692, the Spanish returned to New Mexico and were able to retake it with little opposition.  Although their forces were small, their seven cannons bore silent witness to what would happen if the Pueblo leaders did not agree to peace.

The fourteen pueblos revolted again in 1696 beginning with the killing of five mission priests and thirty-four settlers.  Reprisal was immediate, bloody, methodical and protracted.

Although both failed, the Pueblo Revolts of 1680 and 1696 did have some positive results.  The Pueblos were given land grants; a public defender was appointed to protect Indian rights; and the Franciscans, when they returned to New Mexico, were not as adamant as they had once been that the Natives give up their traditional religion.

For his Tewa Tales of Suspense! series Garcia cast the rebellion in a comic book format.  By employing this style, the artist makes a painful episode in American history accessible to a wider audience, especially young people. 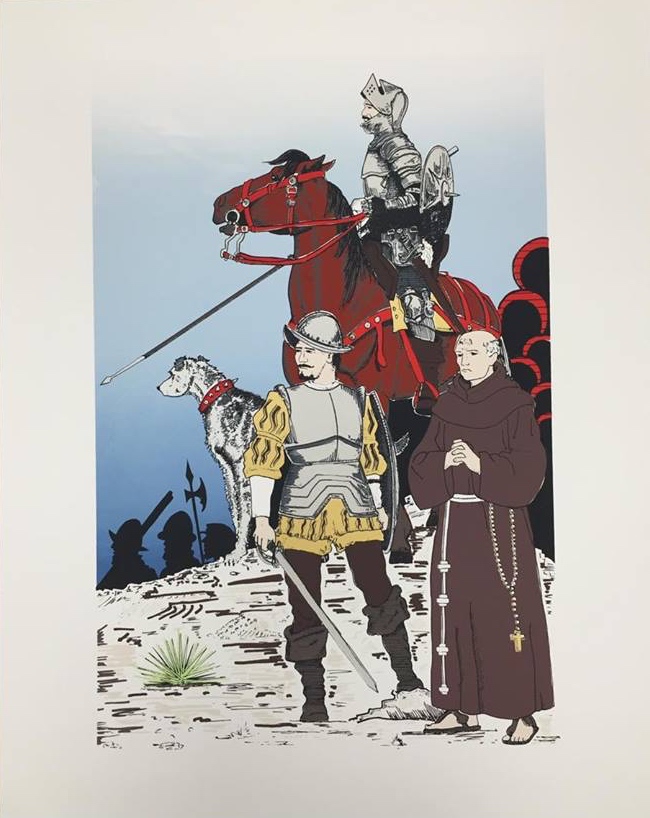 The violent uprising of 1680 was a desperate response to the harsh rule of the Spanish.  The Iron Men Cometh!, the first print in the series, sets the scene.  The viewer is presented with the antagonists in the story: a Franciscan priest, an armor clad conquistador with drawn sword and, behind them, another armored conquistador, bearing a lance, astride a horse.  Near by is a mastiff, a giant dog used to intimidate the Native population.  In the background are three shadowy figures bearing arms.

The palette of this print is muted, casting the scene predominantly in hues of brown, gold, grey and an overarching blue sky.  A sense of foreboding is created by the black, shadow-like figures to the left and the black clouds outlined in red clearly noticeable to the right behind the priest and the soldier on horseback.  This is the calm before the storm. 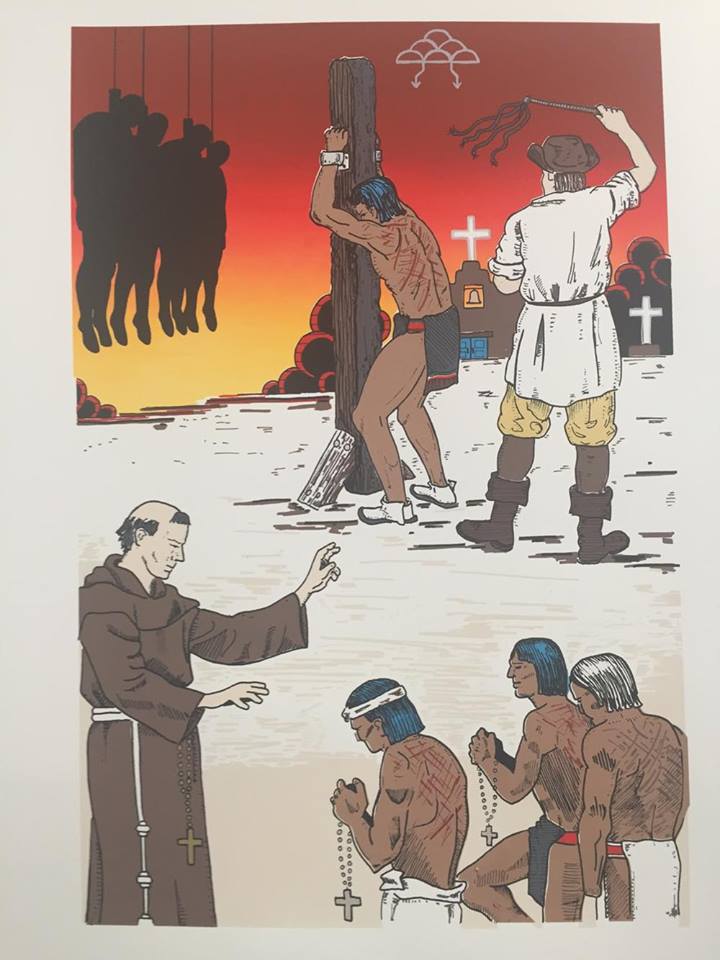 In If This Be Doomsday, the story darkens considerably.  The scene is set against a blazing red and yellow sky with black clouds outlined in red rising from the horizon.  In the background is a mission church surmounted by a cross.  Nearby is another cross.  To the left, four Native men, presented in shadow, have been hanged.  In the center of the print a Native is being flogged, the marks of the whip clearly evident on his back.  In the foreground three Pueblo men, Rosaries in hand, kneel before a Franciscan priest, their backs covered with lash marks.  Above the scene a Pueblo cloud symbol hovers, yielding no rain.  Through the use of color and the placement of figures, Jason Garcia presents a concise narrative to the viewer. 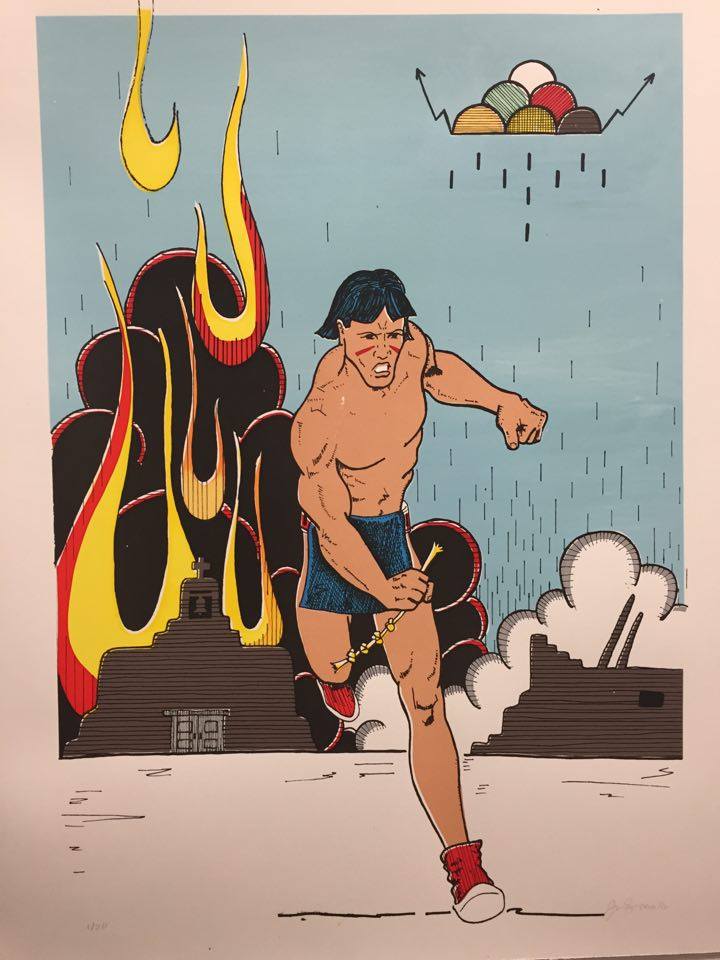 A Tewa messenger carrying the knotted cord that ignited the countdown to the Pueblo Revolt runs towards the viewer in Danger in the Air, which immediately draws the viewer into the action.  Behind the runner, a mission church has been set ablaze.  The scene is set against a turquoise sky in which a multicolored Pueblo raincloud pours down rain amid black and white clouds  billowing up.  Once again, with powerful imagery, Jason Garcia brings the 1680 rebellion to life. 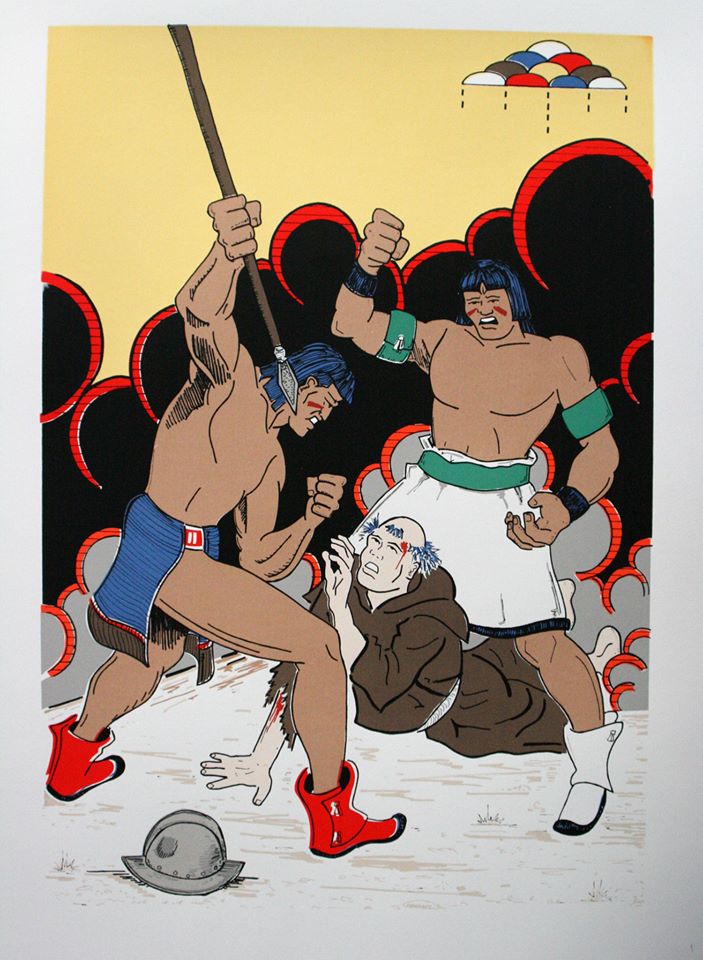 The World Renounced presents another dramatic scene.  According to the artist, the print “. . . illustrates the Priest that went to Tesuque Pueblo to find out about rumblings of the start of The Revolt and was the first Priest that was killed on August 10, the day before the original planned date of August 11, 1680.”   Against a golden sky, in which a multicolored Pueblo raincloud hangs, foreboding black and grey clouds lined in red rise up.  Before them two Pueblo warriors attack a Franciscan priest.  In the foreground is a conquistador’s helmet, an allusion to the cause of the violence. 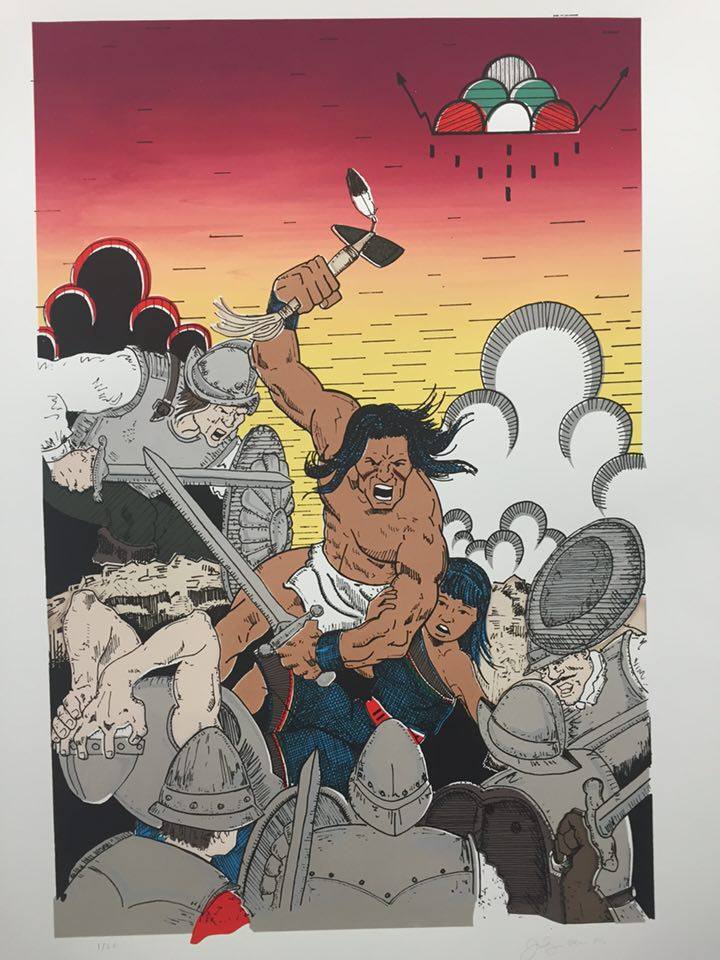 Against the backdrop of a red and gold sky, a lone Pueblo warrior, protecting a female, fights off six Spanish conquistadors in To Conquer a Colossus.  The print, drawing on the comic book convention of the superhero, presents the outnumbered Pueblo warrior , tomahawk in hand, challenging better armed opponents. 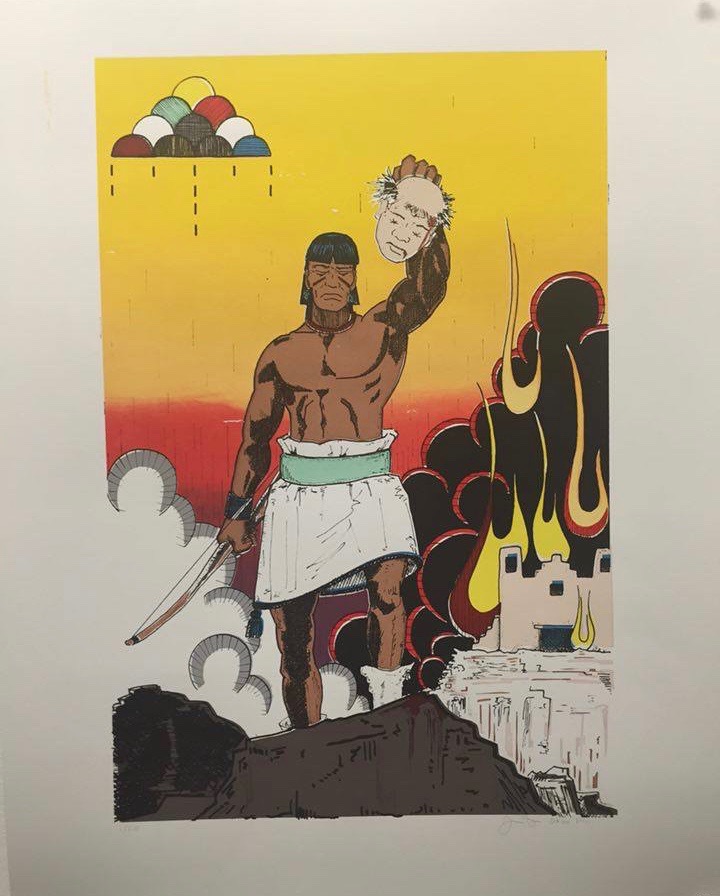 Awatovi was the first of the Hopi villages to be visited by the Spanish in 1540, but it was not until 1629 that there was a serious effort to convert the inhabitants to Christianity.  In that same year, the mission church of San Bernardo de Aguatubi was built over Awatovi’s main kiva.  During the Pueblo Revolt in 1680 the church was destroyed.  However, during the Reconquest plans were made to rebuild the mission but, by 1700, tensions between the Christian converts and adherents of the traditional Hopi religion in all the other villages exploded.  Warriors set upon the Awatovi, killing all the men.  Many women and children also died and those that survived were dispersed among other Hopi villages.  According to Hopi oral history, the village’s priest was beheaded.  In fact, there is a Hopi katsina called Yo’whe that represents the killing of the priest at Awatovi.  A severed head hangs from its waist.  The Yo’whe or Priest Killer katsina is one that is not carved often.  Awatovi has been a ruin since 1700 and today the village is off-limits to visitors and is rarely discussed among the Hopi.

Although what happened at Awatovi took place twenty years after the initial Pueblo uprising, it is still considered part of the Pueblo Revolt story.  Jason Garcia’s print Priest Killer shows a Pueblo warrior holding a priest’s severed head.  White clouds and black clouds lined in red loom up as he stands triumphantly against a red and gold sky, the mission church aflame. 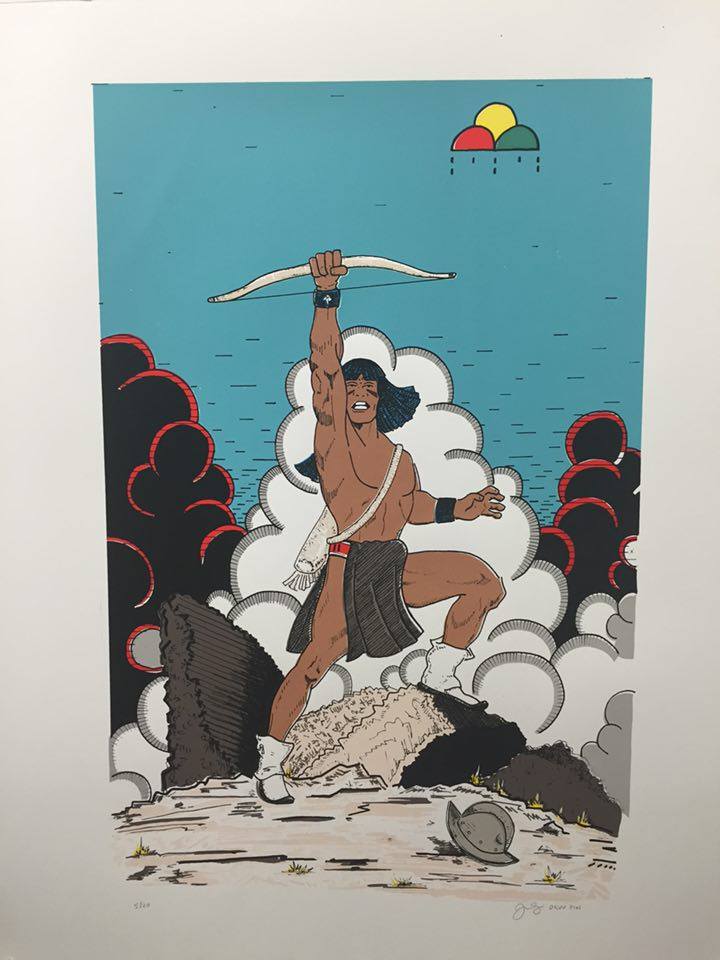 Set against a turquoise sky with the familiar Pueblo raincloud symbol, Victory! presents a Pueblo warrior, raising his bow his bow high in a gesture of defiance and victory.  His stance is much like that of a comic book superhero.  Behind him billowing white clouds lined in gray separate black clouds lined in red.  Once again, in the foreground is a conquistador’s metal helmet, indicating the colossus that has been conquered.

For most of the 20th century and into the 21st, there has been a bias on the part of many artists, museums, and collectors against figurative and narrative art, favoring instead art that is abstract.  However, the style of Jason Garcia’s Tewa Tales of Suspense! series perfectly suites his artistic intentions.  The prints present a difficult and troubling aspect of American history in a nonthreatening manner.  The use of vibrant colors based on comic book art allows the artist to draw the viewer in to consider controversial aspects of our country’s history.  The seven works in the Tewa Tales of Suspense! series are visually powerful and leave a deep impression on anyone who views them, which was clearly the artist’s aim.  Once seen, they are hard to forget.