The purpose of art is not merely to be decorative. Great art forces us to see the world around us from a unique perspective. While art can be beautiful it can also be unsettling, shocking, or thought provoking. The work of great artists not only elicits an emotional response but, also challenges us to think about what we are feeling as well. To do this, artists take inspiration from the environment and time in which they live and from their emotional reaction to important cultural, social and personal events. Rick Bartow, one of our most important contemporary artists, produces work that is both intense and visceral. His art reflects the concerns of an intelligent and caring man trying to sort out the complexities and disappointments of life. Often filled with anguish, anger and, sometimes, humor, Bartow’s art cannot easily be confined solely to culture based interpretations nor is it completely angst driven. 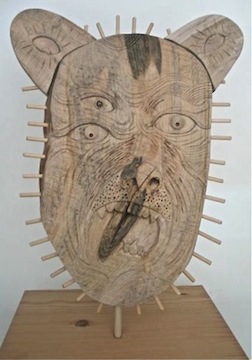 Bear Face, one of the artist’s most powerful creations, might superficially be read as a transformation mask which, in essence, it is. However, although he draws on this cultural tradition, Bartow’s interpretation brings the ps
ychological component of the piece to the forefront. The work’s title is a play on words since the artist is laying bare the human face and, by extension, the emotions it shows. The bear often represents the sluggish, brutish aspects of human nature as well as the use of brawn over brains. Bartow carved the piece in such a way that, as natural light plays across its surface in the course of the day, subtle changes occur, suggesting the darker, more volatile emotions that lurk just beneath the surface in all of us. This concept is reinforced by the three eyes, the snarling mouth and the spike-like protrusions surrounding the face, which may indicate a “prickly” or difficult personality. 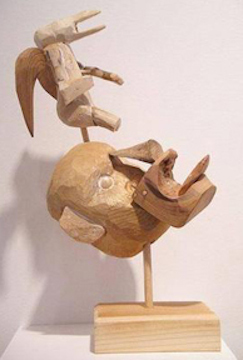 Bartow employs humor as his principle tool in Bear and Crow Conversation. Although Crow is a trickster, he is said to have brought light to humankind. Considered among the most intelligent of species, crows can easily outsmart other creatures, including humans. Crows have been known to circumvent any obstacles devised by people and have been observed apparently teasing bears by repeatedly flying at them, pecking their head, then flying off only to return. With Bear and Crow Conversation, the viewer is left to wonder what might be the subject of discussion. The bear’s exaggerated mouth, with protruding lips, gives the face a human quality, suggesting that this work is not really about animals. Crows usually represent intelligence while bears are equated with brute force – two aspects of human nature that are perpetually in conflict. 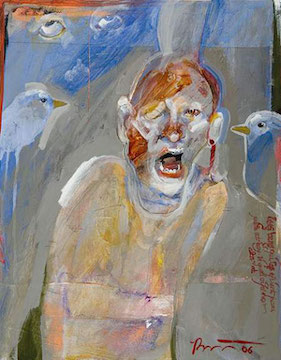 Contemporary art is often more about feeling than meaning. Eliciting a particular emotion in the viewer becomes the meaning. In Rain Chant Little Narrative XXVIII the artist’s anguish is immediately felt. The work’s title would lead one to believe that the figure is praying for rain. Painted expressionistically, the works suggests much more. Perhaps it is a cry for the blessings of life since rain symbolizes fertility, bounty, hope and the creative force. The figure is flanked by two birds, possibly doves, and above are two disembodied eyes looking heavenward. Bartow often employs this conceit, sometimes with eyeglasses that resemble the iconic pair he wears. Rain Chant Little Narrative XXVIII exudes a spiritual, somewhat mystical tone that is visually and emotionally powerful. The work has a raw, visceral quality achieved by the way the artist applied the paint to the canvas. The brushstrokes are neither delicate nor beautiful and, for this reason, the viewer feels the full force of the emotions with which Bartow has imbued his paining. It stirs the viewer to feel as well as to think.

Bartow has also created a large body of prints. Among the most visually interesting and provocative are his black and white prints, which were produced in editions that were extremely limited. In 2010, during a residency at the Pilchuck Glass School in Stanwood, Washington, he produced Self & Coyote, Pilchuck Raven and other works employing animal imagery.   However, these works are not slavish representations of wild creatures; each has a decidedly expressionistic quality.

In Self & Coyote, the artist places his own image and that of a coyote on the page. Among many Native groups, the coyote is an important
culture figure. Noted for his sly intelligence and stealthy behavior, Coyote is most often portrayed as a trickster. However, it was also he who gave fire and other sacred gifts to humans. Demonstrating the outcome of bad behavior, Coyote illustrates human vices and foibles. Coyote can also be a creative force, educating and helping humans though he is always a comic paradox – clever as well as foolish; teacher as well as troublemaker. Most often, Coyote’s lack of foresight gets him into trouble and his shrewdness gets him out of it. No matter how difficult a situation Coyote may find himself in, he always survives. Perhaps this is why Bartow associates himself with this intriguing character. Although Self & Coyote is a black-and-white print, the artist has chosen to hand color one area pink – his own nose – adding a bit of humor to the piece.

A number of animals, such as ravens, have consistently been subjects in Rick Bartow’s work. This intelligent creature is, like the coyote, regarded as a mischievous trickster. In Pilchuck Raven, the artist renders the bird in a somewhat expressionistic manner. The print also includes what are, in essence, two small studies. In the upper left hand corner of the page a raven’s head is shown in detail while in the lower right hand corner there is the head of another bird, possibly a jay, perhaps for comparison. Since the artist often uses animals as a sort of stand in for himself, this work and others like it may be a type of symbolic self-portrait. The print also contains loosely written letters, the word Pilchuck (a reference to where the piece was created) as well as ink “dots,” “splats,” and “scribblings” that give the work a spontaneous feel. 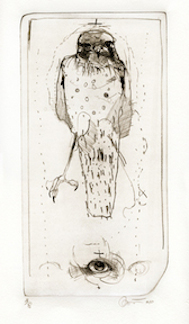 Another of Bartow’s wild subjects is explored in Little Hawk Observed. The bird appears to be loosely rendered, a cross above its head. Below this image is an eye; it ,too, with a cross above. This may represent the artist observing the animal or his contemplating his connection to it. Bartow often employs a variety of creatures as symbolic representations of different aspects of his personality. With regard to this conceit, the artist stated “. . . hawks, owls, eagle, coyote, beaver, and on and on – they are me and I am them in observation and lesson.”

Even when Bartow does something that appears straightforward there are usually other factors at play. At first glance, Dignity/Grace I seems simply to be a self-portrait. However, the artist has chosen to cast his image as a death mask, eyes closed sans his iconic eyeglasses. Like the words of the title, Bartow also “splits” his portrait and then appears to have crossed out the words Dignity/Grace, which are at the bottom right of the page. The print may suggest how the artist wishes to be remembered as well as his concern that this might not occur. The split image may also signify personal struggles faced by Bartow. Ever the iconoclast, Bartow thumbs his nose at convention: though he seems dead, the artists portrays himself with a toothpick in his mouth, adding a bit of humor to a somewhat somber subject.

Rick Bartow’s art is powerful, sometimes disturbing but it is never obvious or trite. Whether it is the surreal and expressionistic power of his paintings and prints or the raw elemental quality of his sculptures, Bartow’s work is always powerful and visually striking. He is an artist who has taken personal difficulties – nightmares from his Viet Nam War experiences, struggles with alcohol and the death of his wife from cancer – and turned them into art. Bartow’s work is mysterious, complex, and defies categorization.