Each year scores of tourists are drawn to Alaska’s Pribilof Islands by the prospect of seeing millions of animals in their natural habitat.  Most, however, are totally unaware that the “Galápagos of the North” was once the site of a shocking human tragedy that lasted more than 200 years.

The history of the Unungan, the Aleut name for themselves, goes back more than 10,000 years in the Aleutians, an island chain that extends over 1,000 miles into the Pacific.  Here they survived by fishing, hunting sea mammals and birds, and by gathering sea urchins, mussels, seaweed, and bird’s eggs.  Aleut society was complex.  Each village had a chief, council of elders, and shaman – all chosen by common consent.  The Aleuts practiced acupuncture and suturing, performed autopsies and had extensive knowledge of herbal medicines.  They also created unique bentwood whaling hats and wove some of the finest baskets ever produced.  Although the Aleuts were aware of the Pribilofs, which are located 240 miles north of the Aleutians and 300 miles west of mainland Alaska, they had never inhabited the islands.  This was to change with the arrival of the Russians.

In 1741 the St. Paul and the St. Peter sailed into the Aleutians as part of Vitus Berring’s second expedition to explore the waters north and east of the Siberian Coast.  The St. Peter was shipwrecked on an uninhabited island but the survivors were able to fashion a new vessel from salvaged wood and managed to return to Russia, bringing with them 900 sea otter pelts.  It was an event that would eventually change the fate of the Aleuts forever.

Siberian sable fur had long been a highly valued commodity in much of Europe for the warmth it provided, but the species had been hunted almost to extinction.  Russian merchants now looked east to the Aleutian Chain for a new source of warmth and wealth.

By 1745 the first promyshlenniki (Russian fur hunters) landed in the Aleutians and forced the Aleuts to hunt for them.  By 1772 the Russians controlled the entire chain of islands with the natives enslaved to them and, despite Aleut warnings, had all but wiped out fur bearing animals such as foxes and sea otters.  The ecological catastrophe was only surpassed by the human one.  As the Russians took island after island they attacked Aleut villages, taking captives.  Males were forced to hunt sea otters as far away as Baja California; children were held prisoner to ensure that their fathers would obey; and females were sent to the men of Siberia who perpetually lacked women.  The only defense the Aleuts had against Russian muskets was to flee but they could not hide for long.  When they tried to revolt, the Russians enacted a brutal revenge, killing more than 3,000.  Smallpox, tuberculosis and other diseases, to which the Aleuts had no hereditary immunity, further destroyed the population. 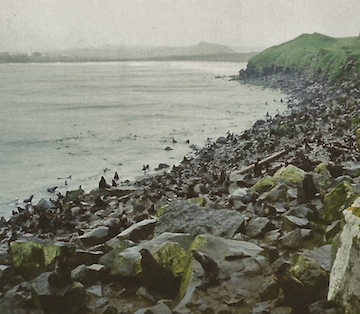 Sea otter and fox furs had become prized in the courts of Europe and Asia and Siberian merchants became rich supplying them.  Even when the animals were on the verge of extinction the Russians did not stop their hunting.  Instead, they simply began to look for a new area to exploit.  Having been forced to participate in the slaughter of sea otters and foxes, the Aleuts wisely did not reveal the location of the fur seal islands, which they called Amiq.  However, this only forestalled the inevitable.   Having seen the animals in open water the Russians became obsessed with finding the place where they hauled up to breed, searching north and south of the Aleutian Chain for ten years, but finding nothing.  Then on June 25, 1786 the St. George, navigated by Gerrassium Pribylov, came upon an island rich in sea otters, foxes, fur seals, sea lions and walruses that the Russians named after their ship.  A year later they found another island, which they called St. Paul.

Aleuts were brought to the islands to harvest huge amounts of walrus ivory and furs that were shipped back to Siberia.  Soon other Russians were hunting in the Pribilofs.  Within a year the sea otter population around the islands had been decimated and the promyshlenniki turned their focus on the fur seals.  Once again, in spite of their warnings, Aleuts were forced to kill females and pups along with males and each year the fur seal population dwindled.

In 1781 one group of Siberian merchants gained sole control of hunting rights in Russian Alaska for twenty years and ordered most Russian fur hunters to leave.  Not only did these merchants now have a monopoly on the furs, they could also rely almost completely on a cheaper labor force – the Aleuts.  Promyshlenniki had to be paid an average of 300 hundred rubles each year while Native hunters were paid in goods valuing less than 60 rubles.  The Aleuts were essentially slaves.  Sadly, however, their plight was not an uncommon one.  During this same period Pueblo and Navajo people were enslaved in the Spanish Southwest, as were Africans in the American South. 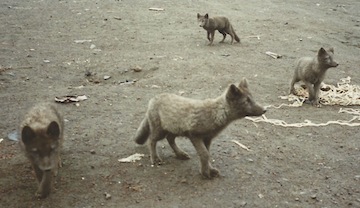 Eventually the Russians found it more economical to create Aleut communities on St. Paul and St. George rather than transporting hunters to the islands each year during the breeding season.

By 1864 the Russian Government was looking to divest itself of its American colony.  The country’s involvement in the Crimean War had been a serious drain on the Imperial Treasury and each year the fur seal harvests were becoming less profitable.  In the United States, Secretary of State William Seward lobbied hard for Congress to approve the purchase of this vast area.  Spurred on by the doctrine of Manifest Destiny and fearing that other interested parties, in particular Canada, might acquire Russia’s American possession, the U.S. eventually bought it for about two cents an acre.  In the process the territory’s Native people were simply passed from one country to another, their rights never even considered.  Alaska Natives were outraged but powerless. 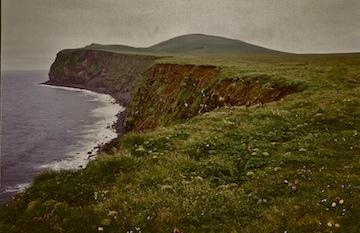 By the time the U.S. took possession of the Alaska Territory in 1867 the Aleut population had been reduced to less than 5,000 from an estimated high of 16,000 to 20,000 at the time of Bering’s arrival.  They had been murdered, enslaved, devastated by hunger and European diseases, and literally worked to death.  One would have expected that with the arrival of the Americans the Aleuts would have been freed from their bondage, but the change of governments actually worsened their lot.  Although treated like serfs under tsarist rule, the Aleuts had technically been Russian citizens and over time they had adopted many aspects of Russian culture, including Russian names and the Russian Orthodox Church.  Fluent in their own language and Russian, after the Treaty of Cession the Aleuts were forced to learn English and forbidden to speak Aleut.  Within two years all of their dogs were killed, with the excuse that doing so would protect the fur seals, and their guns were confiscated, making it difficult to hunt for food.  In addition, the Russian Orthodox Church School, by now an important part of Aleut culture, was ordered closed. 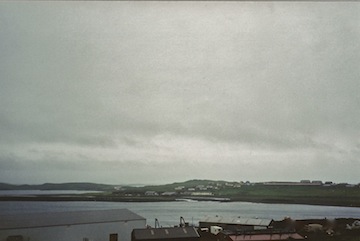 When representatives of the U.S. Government realized the commercial value of the northern fur seal herd, they also understood the importance of the Native labor force and, although the Aleuts were legally wards of the State, they continued to be treated like slaves.  The U.S. Government took almost 97% of the profits from the fur trade while the Aleuts, who did the work, were given about 3%.

Like the Russians before them, the Americans over hunted the seals, bringing them even closer to extinction.  Pelagic sealing, shooting the animals from the decks of whaling ships, further reduced the herds.  The whalers became so emboldened that they even attempted to land on the Pribilofs, but the Aleuts fought them off, thus saving the seals. 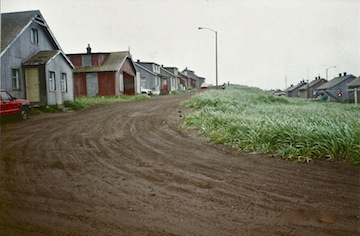 In 1914 the U.S. Congress finally made the Pribilof Aleuts legal residents of the islands they had inhabited for more than 100 years.  However, since the Aleuts were once again being paid in goods rather than cash they were virtual prisoners.  Government representatives insisted that Aleuts had always been free to leave, refusing to acknowledge that they were bound by economic rather than iron chains. Many continued to feign ignorance of the Aleuts’ doleful situation in spite of the fact that it had been clearly communicated to them.  When the Aleuts sent a list of demands to Washington, D.C. in 1916 Treasury Agent Harry Fassett, who was assigned to the Pribilofs, attached a letter in which he bluntly stated that government policies had forced the Aleuts to live like slaves. 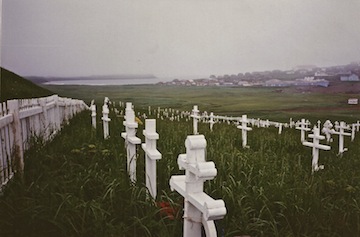 Finally in 1924, with the passage of the Citizen Act, the Aleuts and all Alaska Natives were granted citizenship.  However, the suffering of the Aleut people was not yet at an end.

On June 3, 1942 the Japanese bombed Dutch Harbor in the Aleutians.   By June 16 a U.S. military transport ship had arrived at St. Paul Island and the inhabitants were given one evening to pack their belongings; on St. George the people were given one hour.  More than 500 Aleuts were forced to leave their homes, having no idea where they were being taken.  They were finally deposited in Funter Bay in southeastern Alaska where they remained for two years, living at an abandoned cannery with no running water, insufficient food, inadequate sanitation, and almost no medical care.  Some of the Pribilof Aleuts enlisted in the military and others, though forbidden to do so, made the four-hour trip to Juneau to find work.  Once the war was over and they were returned to their islands, the Pribilof people were no longer willing to let others control their destiny but, in spite of their efforts, they remained enslaved to the fur seal trade.

The 1934 Indian Reorganization Act had guaranteed Native Peoples important rights but it had no affect in the Pribilofs until the 1950s.  Also, in 1951 the Pribilof Aleuts sued the Federal Government for their land rights and for compensation for injustices perpetrated against them.  The suit was not settled until well into the 1970s.  It took more than 230 years for the Aleuts to regain the ancestral lands that had been stolen from them.

Shockingly, it was not until 1966 that the Aleuts were freed from their servitude to the U.S. Government by the passage of the Fur Seal Act.  This law forbade the killing of fur seals in the Pribilofs, with the exception of subsistence hunting by Alaska Natives.  The termination of the fur seal trade meant the end of Aleut slavery.

The Pribilof Aleuts were once again able to take charge of their own future.  Through the Pribilof Inter-organizational Council, corporations were created that still manage assets, make investments and promote fishing and tourism.  In spite of an assault lasting more than two centuries, the Pribilof Aleuts, as well as the fur seals, have survived.

All photographs courtesy of Jeff VanDyke.