Blue Corn was born Crucita Gonzales in 1921 at San Ildefonso Pueblo in New Mexico.  Over the course of the next 70 years, she would become one of the leading names in Pueblo pottery.  Her classic black and red pottery would be replaced by her own innovative polychrome vessels using a variety of clay slips to create color.  Awards and accolades would follow her throughout her career.  Blue Corn created a dynamic range of pottery that continues to resonate throughout the Pueblo art world.

A Video Story Of Blue Corn: All the Colors of the Clay

The Making of a Potter

Crucita Gonzales was an adopted daughter of Ramona Sanchez Gonzales (1885-1934).  Ramona was one of the early San Ildefonso innovators. By the 1920s when Crucita was growing up, Ramona has famous for her distinctive pottery shapes, designs, and colorations.  It was said that Crucita’s grandmother, Ignacia Pena, first introduced her to making clay at age 3.  It was Maria Martinez’s sister, Juanita Vigil, who gave her the Tewa name of “Blue Corn” during her naming ceremony as a child.  Crucita grew up surrounded by potters not only including Ramona but her daughter-in-law Juanita Gonzales.

Blue Corn said of her childhood, “My grandmother (Ignacia Pena) was blind.  She put her hands up to touch my face the way blind people do and she said: “You’re going to be a potter”.  And that’s what happened.  I had to stay home from school because my mother and father needed me.  I was the oldest so I stayed home.”.   In actuality, she attended the Santa Fe Indian School.  While she was at the Indian School she did take some pottery making classes from Maria Martinez.  There is a famous photo of a class Maria and Julian Martinez were teaching at the Santa Fe School with a young Blue Corn in the group.

Blue Corn’s life would begin to change when her mother Ramona passed away in 1934 and then her father, Juan Gonzales, passed in 1935.  While Blue Corn was still living at the Pueblo in 1937 according to the Census, in 1938 she moved to California and worked as a maid in Beverly Hills.

In 1941, Blue Corn returned to San Ildefonso Pueblo and Married Santiago Calabaza from Santo Domingo Pueblo (Kewa).   Santiago “Sandy” was a silversmith and made hei-shi beads.  They decided to start their life together living in San Ildefonso Pueblo.  Blue Corn famously got a job as a housecleaner in nearby Los Alamos for the physicist, J. Robert Oppenheimer.

After the end of WWII, Blue Corn and Sandy decide to begin making pottery as a full-time career.  Their first son, Joseph, had been born in 1941.  Together they would have ten children.  As Blue Corn returned to the clay her early pieces were only blackware or redware.  Each piece was made with native clay from San Ildefonso Pueblo.  Blue Corn would make and polish the pieces while Sandy would paint or carve designs.  The designs were traditional in style throughout the 1950s with increasingly intricate variations in carving and iconography.  Sandy utilized primarily San Ildefonso designs for the pottery but giving them his own stylistic twist resulting in an unexpected innovative appearance.  By 1957 they were successful enough that Sandy quit his job to help design pottery full time.

In the late 1960s, Blue Corn began to experiment with multiple colors on her pottery.  The term “polychrome” means more than three colors used on a piece.  Blue Corn said, “I wanted to see if I could make pottery similar to this old piece (a polychrome shard she had in her home).”  She began by polishing the surface with a gray/white clay. The designs would then be painted with either black clay slips or guaco.  Details in the designs would be accentuated by additional colors of clay which she found in local areas.  She said, “Only I know where to find these colors.  I don’t know what the pottery is going to look like until I make it.”.  The polychrome pieces were definitely the result of experimentation and she said her secret was “to polish very slowly”. 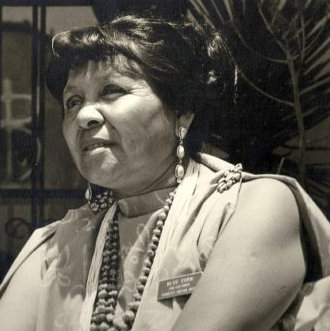 There was exceptional variation and variety in the new polychrome work with green, yellow, taupe, and other colors making an appearance the highly polished surface.  Blue Corn once said, “I use all the polishing stones so that the others don’t cry.”.  By 1970 they were creating an ever-increasing variety of polychrome styles which were visually distinctive as the work of “Blue Corn”. 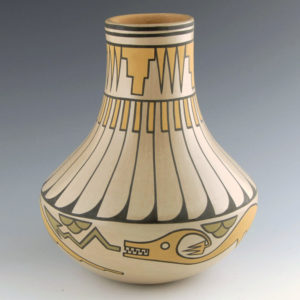 The polychrome work was not initially successful.  Blue Corn would fire pieces and they would often get fire clouds or the black guaco (from bee-weed) would not adhere to the clay.  However, with persistence, not only did she nearly perfect the painting process, but also the firing.  The smoke clouds were nearly gone by 1970 and the firings became more pristine.  In addition to perfecting their pottery art, Sandy and Blue Corn made a dynamic couple as they traveled for gallery shows and demonstrations.  Richard Spivey remembered that Sandy had a great sense of humor.  They would also dress for events wearing impressive Native jewelry and traditional clothing. Spivey said that as pair, they always drew attention with their dynamic personalities and presence.  Blue Corn began to be sought out for her pottery, including visits to the pueblo by dignitaries such as Princess Anne and former first-lady Lady Bird Johnson.

In 1972 Sandy Calabasa passed away.  As he had designed and painted all the pots Blue Corn found it difficult to resume a technique that she hadn’t practiced in more than 15 years.   However, it was her first son, Joseph, who stepped in and began painting much of her pottery.  Later, her son Craig would also help with painting.  However, the early 1970s was a moment in time when Native Art found a new resonance and voice in American culture.  Renowned potters like Maria Martinez were retired but the world was looking for more traditional potters from San Ildefonso. 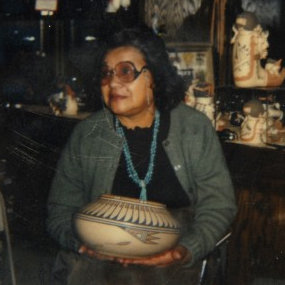 Blue Corn was one of the featured potters in the famous 1974 Arizona Highways magazine.  Black, red, and polychrome vessels were all featured in the article.  She began reaching out beyond the Pueblo and conducted numerous workshops on pottery making in both the U.S. and Canada.  She won numerous awards at Santa Fe Indian Market and more than 60 other awards for her work.  In 1981 she received recognition for her pottery at the 8th Annual New Mexico’s Governor’s Award for the Arts.  Blue Corn was so exacting and innovative in her designs that decades after her passing, her pottery continues to be influential and highly sought after.  In both a testament to her skill as a potter and a reflection of her creativity, she was posthumously awarded the 2008 “Lifetime Achievement Award” by SWAIA and her work can also be found in the book “Legacy of Generations”.

The End of a Career

While Blue Corn was among the most famous Pueblo potters in the 1980s.  By the end of the decade, however, she was diagnosed with Parkinson’s Disease.  She was not able to continue making pottery and retired.  After nearly a decade, she died May 3, 1999, leaving ten children, 18 grandchildren, and 12 great-grandchildren.

Her pottery legacy is one that has barely diminished over time.  Her extensive traveling during the 1970-90 period included meeting numerous people around the world. These personal connections have added to keeping her work relevant over the years.  Her distinctive polychrome style has also not been reproduced by any other potter from San Ildefonso.  As time passes the work not only grows more understandably unique but also increasingly special as a continuation of the creative styles of San Ildefonso from the 1920s onward.

Over the course of 50 years, there are variations in Blue Corn’s signature.  What is consistent is that it is either stone polished into the clay before firing or else painted onto the base before firing. Typically, it will say, “Blue Corn, San Ildefonso Pueblo” or some variation on Pueblo.
I have only seen a few pieces with dates on the bottom.

Blue Corn Memories From our Clients

If you have any photos or stories of Blue Corn you would like to share, please let me know!  It would be great to have a section of photos of her!