Many years ago, when I was attending elementary school, my geography book contained a photograph of Crater Lake.  It is an image I never forgot.  Even at that young age, I knew that someday I wanted to visit this natural wonder.  Although I traveled to Oregon in 2003, I was not able to achieve my goal.  However, in 2016 I made up my mind that I would, at last, go to Crater Lake National  Park.

Seeing Crater Lake, especially for the first time, is mesmerizing.  I defy anyone to turn their eyes from it.  The expanse of the caldera and the blueness of the lake draw one in.  It is a sight for which adjectives fail.  Visitors instinctually seem to understand that this is a special, sacred place.  Perhaps this is due to an eerie, unearthly silence that seems all-pervasive.  It is something that Native Americans have believed for thousands of years.  The Klamath tribes – the Klamaths, the Modocs, the Yahooskin – and the Cow Creek Umpqua visited the Crater Lake area since ancient times.  The devastation wrought by the region’s volcanic eruptions is quite accurately recorded in their oral traditions.  Woven  bark sandals, obsidian tools, and atlatls have been found beneath layers of ash dating to, at least, 7,700 years ago – the time of the cataclysmic eruption that created Crater Lake – confirming that Native Americans were present in the area.  For hundreds of generations, Native people have come to what is today known as Crater Lake for spiritual reasons.  Among the Klamath tribes the lake and the land surrounding it is known as gii-was, meaning sacred place. 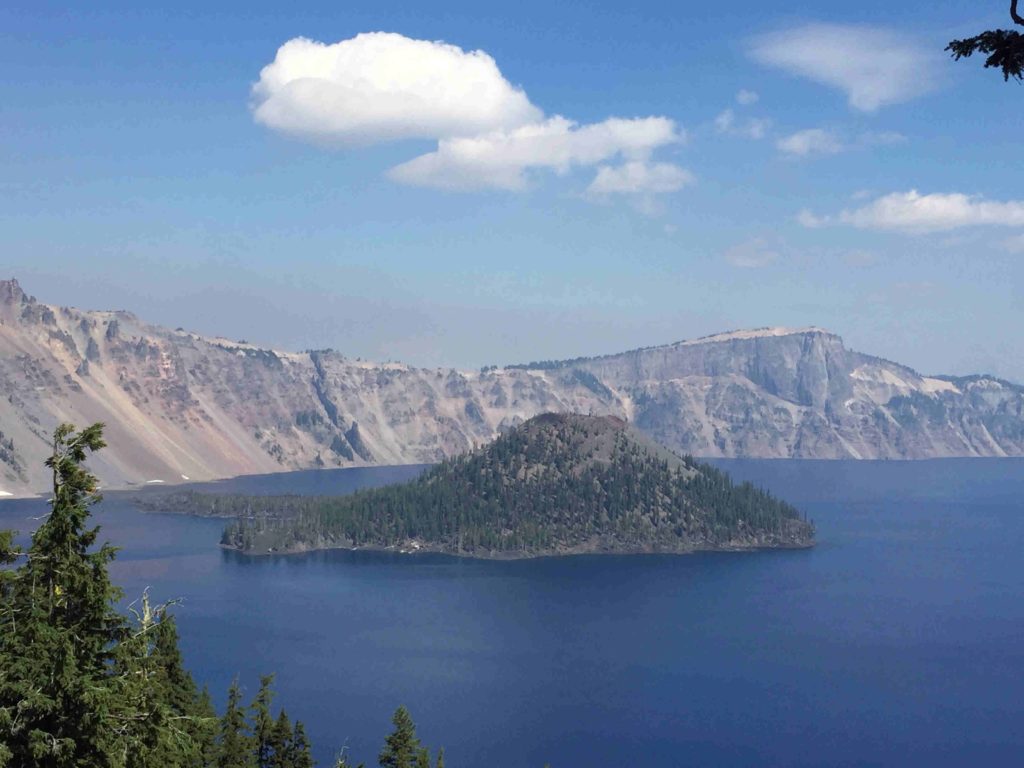 According to the Klamath tribes, in ancient times a great battle was waged, which resulted in the creation of the lake.  A great spirit named Llao, who dwelled in the World Below, often came up to the land of humans to stand upon his mountain, which was called La-o Yaina.  One day he chanced to see a beautiful young woman, who was the daughter of a local chief, and fell in love with her.  Although he promised her eternal life if she joined him beneath the earth, she refused him.  Rejected, he vowed to destroy her people and, standing upon his mountain, began to rain down fire upon them.  However, Skell, the spirit of the World Above, took pity on the suffering people.  He descended to Úytaahkoo (White Mountain), today called Mount Shasta, and engaged Llao in battle.  The ground shook, the sky was filled with fire, and a terrifying darkness fell over the earth as the two spirit beings hurled flaming rocks across the landscape from their mountaintops.  Terrified, the people fled, but two shamans said that they would try to appease Llao by throwing themselves into the fire pit on the top of his mountain.  Moved by their sacrifice, Skell fought harder and drove his opponent back into La-o Yaina, causing the mountain to collapse on itself, forming a large depression.  Torrential rains came, filling the crater with water.  All that remained was an enormous lake.

According to the geologic record, the volcanic eruptions that created Crater Lake happened much the way they are described in the stories of the Klamath tribes.  Over the course of some 420,000 years, volcanoes formed, erupted, and went extinct.  Sometime between 30,000 and 42,000 years ago the volcano that resulted in Crater Lake began to form and reached a height of 12,000 feet.  For three hundred centuries molten lava and pressure built-up.  Then, 7,700 years ago the mountain violently exploded, expelling twelve cubic miles of magma in the form of lava, pumice, ash, cinders, rocks and volcanic gases.  The volcano spewed out so much molten material that it could not support its peak, which collapsed in on itself, creating a caldera.  Smaller eruptions continued, sealing the floor of the caldera as well as forming a cinder cone.  Rain and snow melt during a period of some seven hundred to fifteen hundred years filled the caldera, forming a lake. 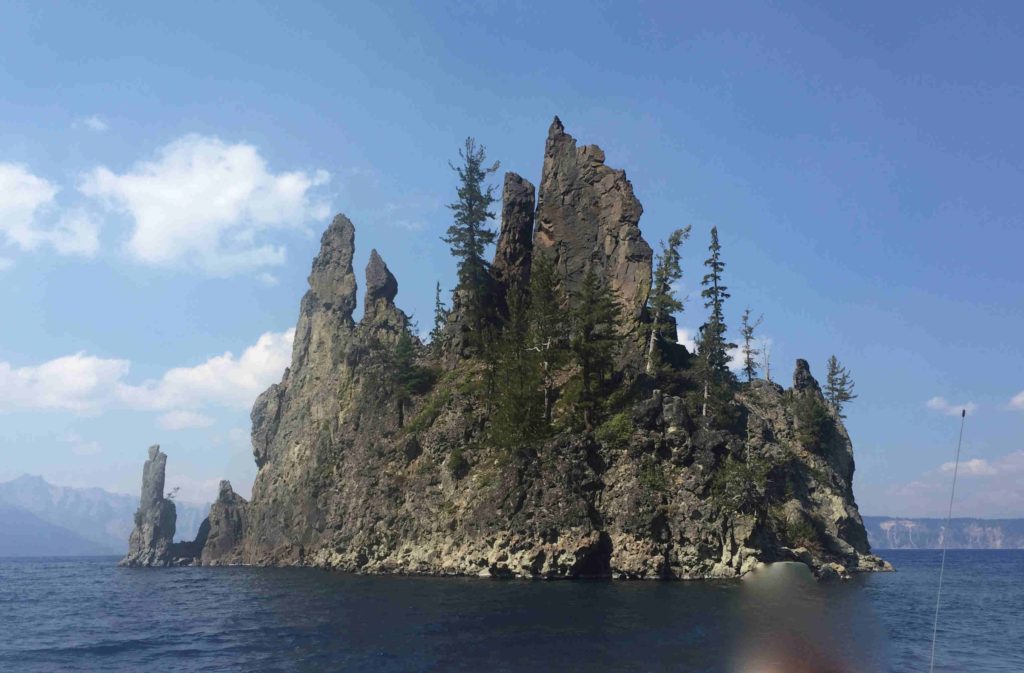 Known as Crater Lake’s “other island,” the Phantom Ship is as tall as a sixteen story building and, at 400,000 years old, is the oldest exposed rock within the caldera.

The volcanic lake was first viewed by non-Natives in the spring of 1853 when miners seeking a legendary gold mine came upon it and called it Deep Blue Lake.  In 1862 another group of prospectors, who were exploring the area, saw the lake and one of them published an article about it in which he stated that they had named it Blue Lake.  In 1865 two hunters, who where working as part of a road crew constructing a wagon road to the newly established Fort Klamath, found the lake and, when word got out, a number of soldiers and civilians went to see it for themselves, one even proposing that they name it Lake Majesty. 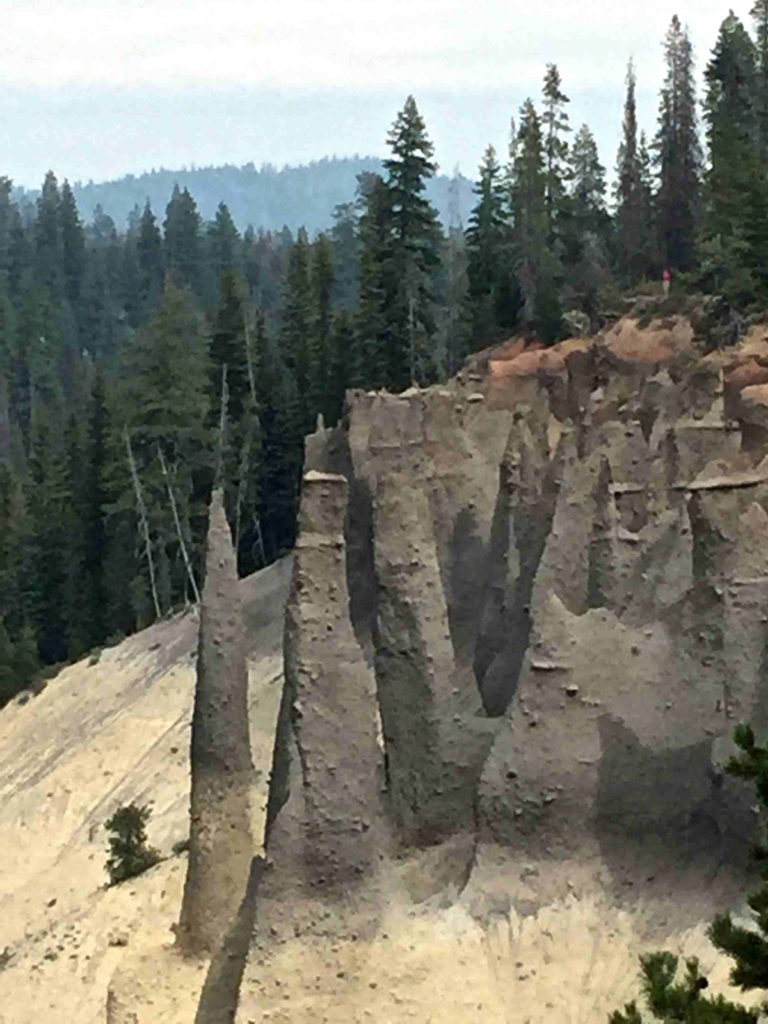 The Pinnacles are located in the southeast corner of Crater Lake National Park.  These fumaroles  were formed during the eruption that created the lake.

However, in 1869, Jim Sutton, a newspaper editor from Jacksonville, Oregon and several others explored the lake.  Sutton later wrote an article about the trip in which he referred to the body of water in the caldera as Crater Lake.  The name stuck.

Crater Lake became a national park mostly through the efforts of one man: William Gladstone Steel.  Although he is called the “Father of Crater Lake,” his efforts and his vision for the park are not without controversy.  He believed that it was important to make the lake available to the public, turning what was once held as sacred into a tourist destination.  Not only did Steel promote the idea of a lodge and a rim drive around the lake, he also envisioned an elevator that would take visitors down to the lake and back as well as a road that would make Wizard Island accessible to cars.

Steel spent seventeen years lobbying Congress to designate Crater Lake as a national park.  He also spent a great deal of time showing the lake and the surrounding area to people of influence and garnering as much publicity as he could.  In 1885 Steel named the crater the Witches Cauldron and also designated the cinder cone island in the lake as Wizard Island.  In 1896 Steel brought The Mazama’s convention to Crater Lake.  The Mazamas is a mountaineering club based in Portland, Oregon, which takes its name from the Nahuatl word mazatl, meaning deer.  At the end of their convention, amid fireworks, The Mazamas named the collapsed mountain that created Crater Lake Mount Mazama. 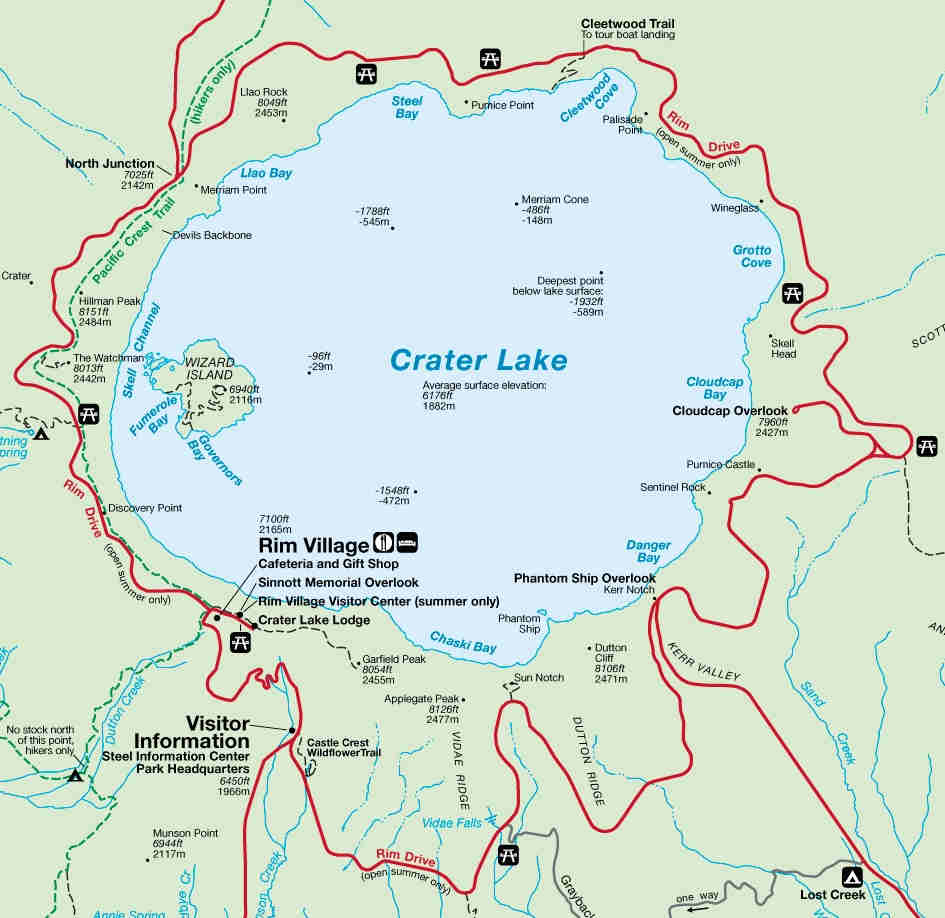 Native names for the area are all but forgotten and most people coming to Crater Lake National Park are unaware that the lake and its surroundings are considered sacred.  Nonetheless, awed by the areas natural beauty, most visitors appreciate that the lake and its environs are unique.  Although its visual splendor is unsurpassed, it is important to remember that this place, like a cathedral, is holy. 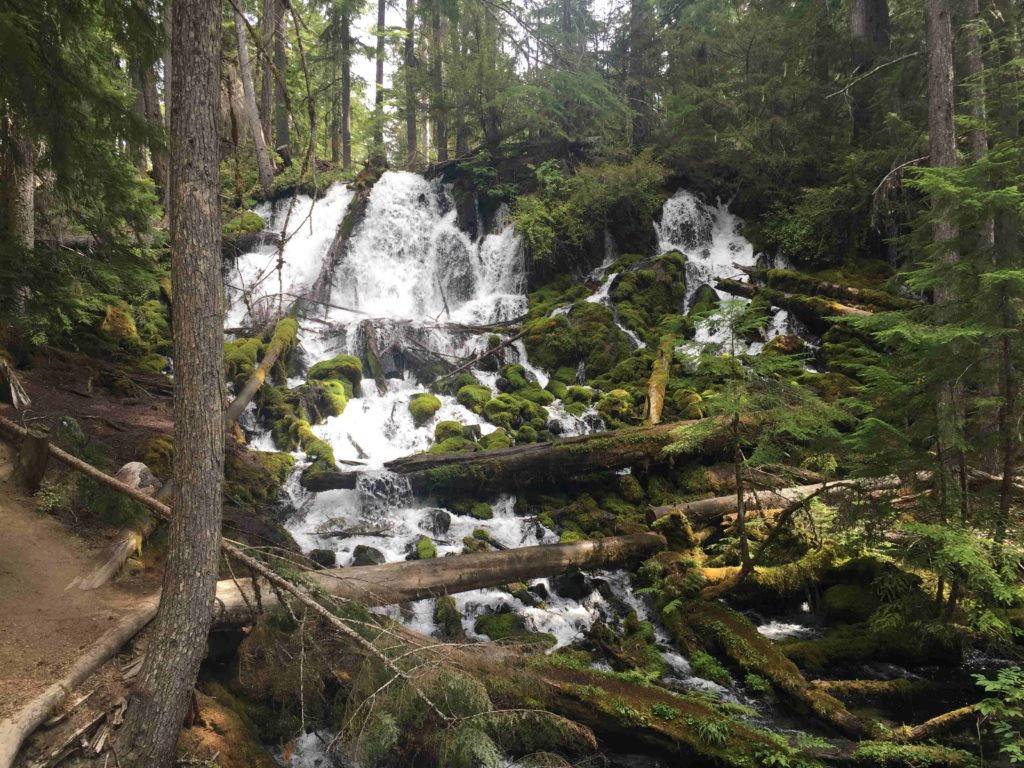 CLEARWATER FALLS: Located at milepost 69.5 on Highway 138, this is a segmented water fall that only requires a walk of a few hundred feet to view it. 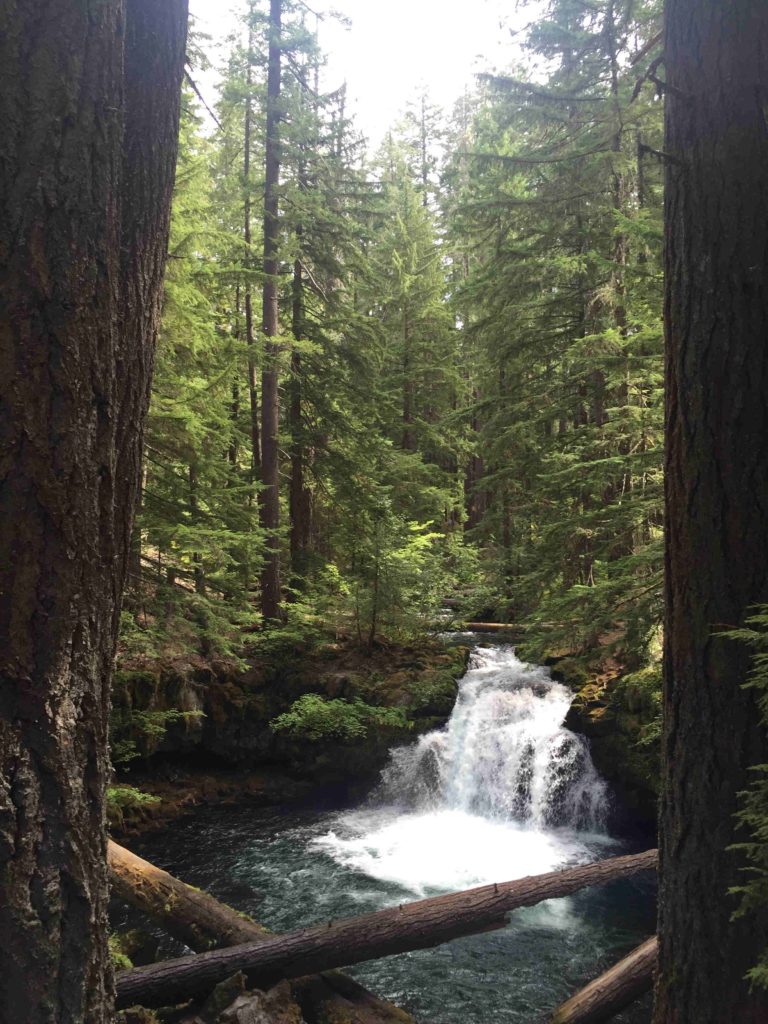 WHITEHORSE FALLS: This water fall is a fifteen foot punchbowl located at milepost 65.9 on Highway 138.  It, too, only requires a short walk to view it. 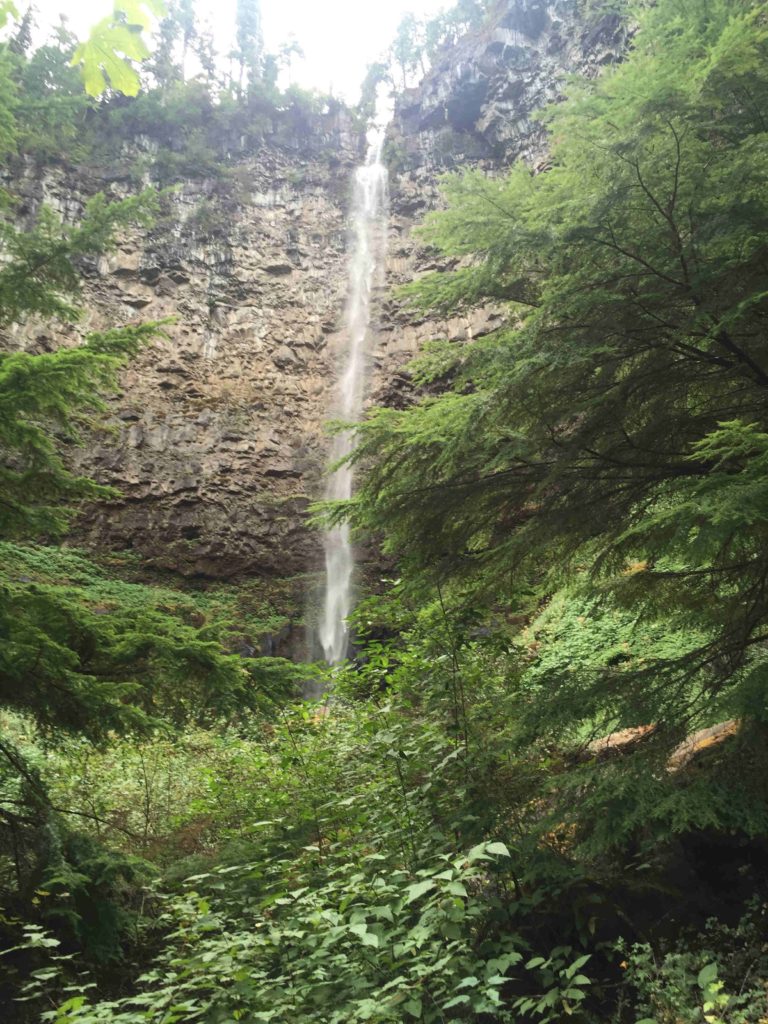 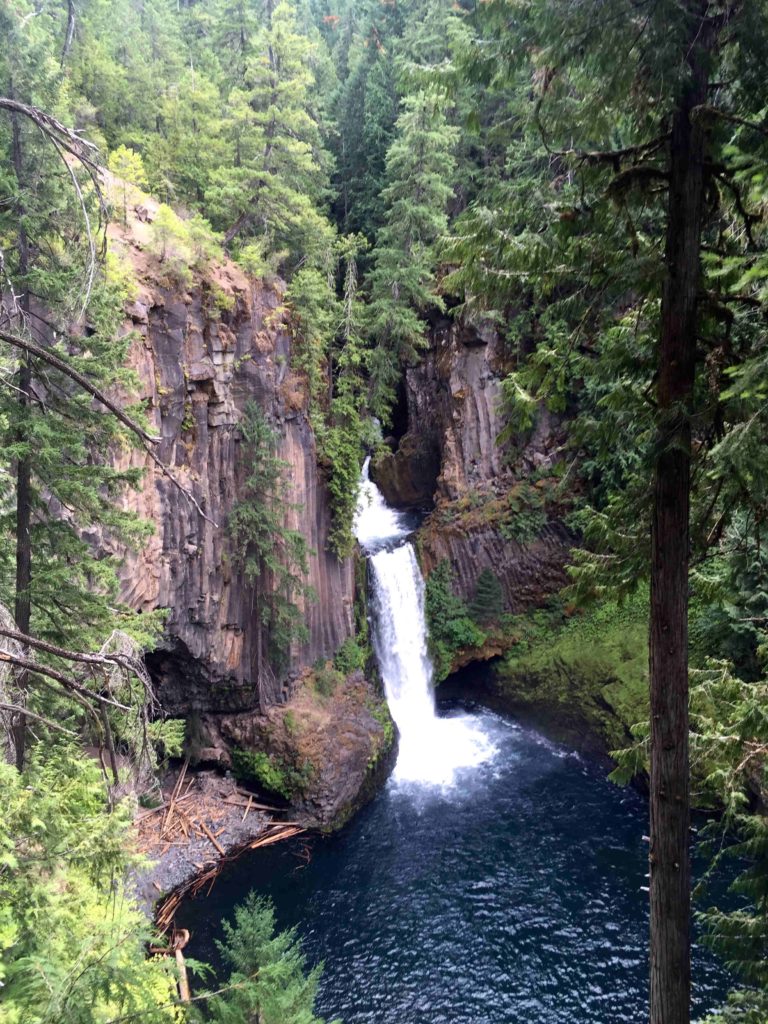 TOKETEE FALLS: Located at milepost 58.6 on Highway 138, this 120 foot high falls is only visible from the viewing platform at the end of a 0.4 mile trail.  Although it is an easy hike, the trail requires 97 steps up and 125 steps down.