The first time I saw the Zuni murals in the early 1990s they appeared to be in pristine condition.  Alex Seowtewa and his sons were in the process of completing them and as I marveled at their vibrant colors and extraordinary beauty I thought that calling them “America’s Sistine Chapel” would not be an exaggeration.  When I returned to Zuni Pueblo in the autumn of 2007 I was shocked to discover that the murals were in danger of being lost forever.  A number of large pieces had fallen from the mural on the church’s north wall.   If something is not done to save them the rest of the murals may soon be gone.  I later learned from Tom R. Kennedy, Zuni Tourism Director, that plaster flaking due to moisture migration has been an ongoing problem since 1996-97.  The Seowtewas initial solution was to chip out large flaking areas and fill them in with plaster and repaint the image, which slowed down the project.

What is today known as Zuni Pueblo was, at the time of the Spanish arrival in 1540, called Halona.  It was part of a group of villages mistaken for Cíbola.  Native traders who had spoken of the villages as having great wealth brought the name south and the Spanish transliterated what they heard into the word Cíbola.  Because of such tales, the Spanish assumed that Cíbola referred to one of the mythical “Seven Cities of Gold,” which they had been seeking.  By 1629 Franciscan priests had begun constructing a church at the village of Halona but it was seriously damaged by fire during the Pueblo Revolt of 1680.  It was rebuilt in 1699 and named Nuestra Señora de Guadalupe (Our Lady of Guadalupe).  However, when Mexico won its independence in 1821 many of the Franciscans returned to Spain.  With few priests left in the territory, Zuni Mission, and others like it, fell into ruin.

When the Franciscans returned a hundred years later, rather than reopening their abandoned mission, now in an advanced state of deterioration, they built a new one north of Zuni, which they dedicated to San Antonio. 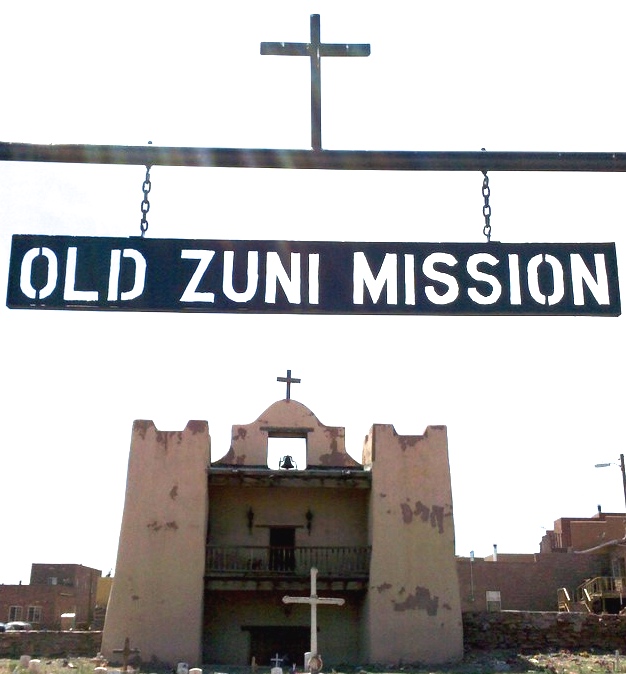 Nuestra Señora de Guadalupe Church/Old Zuni Mission            It was not until 1966 that the Old Zuni Mission, as it came to be known, was excavated by archaeologists, who sought to define the entire foundation of the original building, and not until 1968 that restoration began.  The Mission had fallen into significant ruin but had not been obliterated and archaeologists sought to define the complete foundation of the original building.  The Catholic Diocese, the Zuni Tribe, and the National Park Service funded the project.  At this time, as Zuni artist Alex Seowtewa worked in the church his father recalled hearing stories of kachina murals that had once covered the building’s interior walls.  These paintings had portrayed ogres who disciplined the people and were meant as a warning to the Zunis to attend mass and to observe Catholic teachings.  According to Mr. Kennedy, “There is some thought that the images remembered by Alex’s father were actually from the smaller attached Sacristy on the southwest portion.  During the 19th century, especially . . . in the 1880s, the witch trials were held here and reported to have the disciplinary kachina images.  It is doubtful that such images were actually on the interior walls during the time services were held.”

Inspired by his father’s memories and those of other Zuni men, some over 100 years old, Alex dedicated himself to returning the kachinas to the church’s walls, but in his artistic vision the disciplinary kachinas were replaced with those reflecting the similarities of Zuni and Catholic religious traditions.  It was a project that would take more than thirty years to complete.

Assisted by his sons, Alex Seowtewa covered the walls of the mission church with images from Zuni ceremonial life: on the north wall kachinas and events from the winter solstice celebration of Sha’La/Ko’; on the south wall kachinas and scenes associated with spring, summer and fall ceremonies.  In all, Alex painted twenty-four life size figures representing kachinas, priests, and Zuni elders as well as animals, birds, crops, a traditional kiva altar and weather conditions such as storm clouds and a blizzard.  Standing in the small chapel, I marveled at the richness of detail Alex Seowtewa and his sons lavished on the murals above me and wondered why they were crumbling.

My guide explained that the Zuni Mission is a flat-roofed structure constructed with adobe and, as such, it needs specific and constant care.  Unfortunately, when the church was restored between 1968 and 1970 the exterior walls were covered with cement plaster while the interior walls were coated with gypsum based plaster that is easily deteriorated by the presence of moisture.  Tom R. Kennedy explained the problem: “The exterior walls were cement plaster.  However, interior walls were gypsum based plaster that totally deteriorates in the presence of moisture that has migrated up and in the walls.”  This prevented the walls from ‘breathing.’”  Instead of the moisture from rain and humidity evaporating it is held within the walls, eventually causing them to deteriorate.  The dampness has caused the plaster, on which the murals are painted, to separate from the underlying adobe causing sections of the northern wall to crash to the chapel’s floor.  A large area of a Sha’La/Ko’ kachina, for example, has been lost and large cracks have appeared in other parts of the mural.  This has been an ongoing problem.  As early as 1996-97 the Seowtewas sought to remedy the situation by chipping away the portions of the murals that were flaking, filling in these areas with new plaster, and repainting the images.  However, it was not a permanent solution.

It has been estimated that it will cost over $800,000 minimum to save the murals and to stabilize the church.   By contemporary standards this is not a great deal of money but Zuni Pueblo has had difficulty raising the necessary funds.  In order to safeguard the murals specific things must be done.  Professional curators and restorers are needed to assess the damage and make recommendations on the best way to save the paintings.  In addition, the church’s roof must be replaced, exposed wooden beams need to be protected, and a proper drainage system installed.  In 2003 ownership of the church, deconsecrated and no longer used for services, reverted to the Zuni Tribe who must decide what to do with it.

Some at the pueblo feel that the church has nothing to do with Zuni heritage.  Others disagree, insisting that since the mission has stood at the pueblo for so long and because it has been a part of Zuni history it should be preserved.  What should be done with the murals is even more problematic.

Although the murals document aspects of Zuni ceremonial life that might otherwise be lost, traditionalists feel that non-Zunis should not be given information about religious rituals in any form.  Although kachinas are routinely represented as figures, in paintings, and as jewelry to be sold to tourists with no objection, the mission’s kachinas are life-size and so accurately depicted that they are troubling to some.  A number of Zuni religious leaders feel that since kachinas represent the spirits of natural forces it would be most fitting simply to allow the murals to crumble and return to Nature.

There are also those who object to the murals because they feel it is inappropriate for kachinas to be portrayed within a church since such a structure has nothing to do with the Zuni Way, a complex set of religious, social, and political ideas and ceremonies.  Since the idea of kachinas in a Catholic church is offensive to some traditional Zunis as well as to some conservative Catholics, it has been proposed that the murals be removed intact from the mission’s walls, attached to a more stable surface and then re-installed in a museum built to display, preserve, and interpret them.  However, this solution would not satisfy the traditionalists.

The Zuni Murals are important works of American art that attract hundreds of people each year from around the world.  Visitors from countries as diverse as Italy, Japan and Russia recognize the importance of their artistic and cultural value.  However, whether or not the Zuni Murals will be saved and preserved for future generations remains unclear.  Both Zuni and Christian religious sensibilities must be considered as well as the importance of the murals as unique and irreplaceable works of art.  The fact that their very existence is controversial complicates matters and leaves no easy solution.  Because of a lack of funds the Old Zuni Mission Project is in limbo.  Since there is little money currently available, no one has felt compelled to make a decision as to what to do.   Ultimately, the fate of the murals rests with the Zuni people who must evaluate all available options.  In the end, however, the murals may simply disintegrate, resulting in the loss of one of our National Treasures.

The author would like to express his sincere gratitude to Tom R. Kennedy, Zuni Tourism Director for his invaluable help with this article.