Each time I have traveled to the Hopi Mesas I have been struck by the hospitality and generosity of the people.  However, too often the mainstream press has portrayed the Hopi as rigid and unwelcoming whenever they have closed their lands to outsiders.  Usually omitted, though, is the fact that the actions of the Hopi were provoked by the disrespectful actions of visitors – something I have witnessed.  Not only are Hopi lands a very special place but, more importantly, they are sacred, which is often lost on those who come to the mesas.  The Hopi villages – Walpi, Sichomovi and Tewa on First Mesa; Shungopavi, Mishongovi and Sipaulovi on Second Mesa; and on Third Mesa Kykotsmovi, Old Oraibi, Hotevilla, Bacavi and Moenkopi forty-five miles to the west – do not comprise a Native American Disneyland and they should not be treated as such.  They do not exist for our entertainment.

On my first visit to the Hopi Mesas I decided to take a tour of Walpi, the oldest of the villages.  As instructed, I parked my car outside of the village and walked to where I was to meet my guide.  While waiting, two white vans pulled up.  A German-speaking man emerged from each, read the large sign posted nearby that stated that no vehicles were allowed in the village, got back inside and roared through Walpi.  I stood stunned by such utter rudeness and disrespect.  As guests of the Hopi people, since this is what visitors are, this was not the way to endear oneself to one’s hosts.  Because the village dates back 1,100 years, motorized vehicles pose a threat to Walpi’s fragile structures.  When I told my guide what I had just seen she was not surprised, explaining that such things happened quite often.

My guide could not have been more welcoming or informative.  I was even invited into a home to taste piki, traditional Hopi blue cornmeal bread that is rolled and paper thin.

During the tour, I mentioned that I had just acquired three katsina dolls by Manuel Denet Chavarria and added that I would very much like to meet him.  To my surprise, the guide said, “See that door over there?  His aunt lives there.  Just go knock on her door and she’ll tell you where he lives.”  I hesitated but, with her encouragement, I did as she had suggested.  When the door opened, I explained what I wanted to know and was graciously invited in.  As we sat at the kitchen table, Mr. Chavarria’s aunt gave me his address and directions to his home in a nearby community.  When I arrived at his house, Mr. Chavarria was outside working on his car.  I introduced myself, told him that I had just bought three of his carvings and said that I greatly admired his work.  I was then invited into his studio where I spent over a half an hour happily listening to Mr. Chavarria explain various aspects of his art.  It was one of the high points of my trip.

I made my most recent visit to the Hopi Mesas at the suggestion of Joseph Day whose wife Janice owns the Tsakurskovi Gallery on Second Mesa.  Mr. Day felt that since I had a number of Kachina carvings in my collection it would give me a better idea of their significance if I could actually see one or more of the Kachina dances.  The word dance is often misunderstood by outsiders as it is used in the context of the Hopi religion.  When a Catholic priest says Mass no one would ever consider his vestments a costume in the theatrical sense and, although the service has a dramatic arc, it is not regarded as a performance.  However, the Hopi religion is often not treated with the same level of respect.  Perhaps it is the word dance that confuses since most people are used to singing as a form of worship but not dance.  When non-Hopi hear the word dance, they should think religious ceremony or ritual and act accordingly.   As Joseph Day explained, “In other words, it is not a sock hop.”  All of the dances at Hopi are religious in nature. 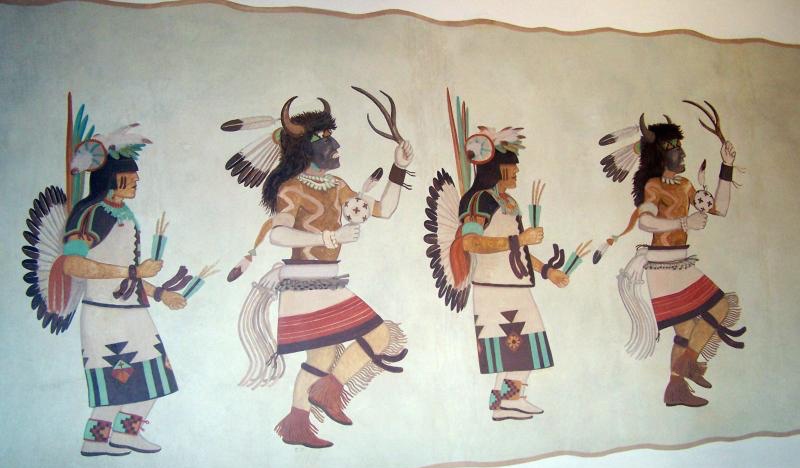 Hopi Buffalo Dance, a mural by Fred Kabotie in the Painted Desert Inn.  The Buffalo Dance is a ceremony that takes place in January to insure good hunting and snow.  It commemorates the time when buffalo were plentiful and Hopi men traveled far to the eastern Plains to hunt them.  The Buffalo Dance is referred to as a “social dance” since it does not involve Kachinas.  However, it does have religious significance.

While on the mesas, I was fortunate to witness a Kachina Dance at Hotevilla.  Part of the Powamu or Bean Dance Ceremony, it was one of the most moving experiences of my life.  The ceremony was rich in spectacle and spirituality as well as humor, something most people don’t associate with religious observances.  Scores of Kachinas, both major and minor, accompanied by guards, warriors, runners, whippers and clowns emerged from the kivas, partially underground ceremonial chambers.  There were also a number of Momoyam or Kachina Women.  Impersonated by men, they ran about flirting and sometimes making humorous sexual advances to male bystanders, usually a non-Hopi, much to the delight of the villagers.  Some of the Kachinas gave symbolic gifts to Hopi children – dolls and rattles for the girls; and bows and arrows for the boys.  It is during the Powamu that children are initiated into the Kachina Cult and, as each one came out of another kiva he or she was met by family members, wrapped in a blanket and walked away.

Sadly, it was the behavior of some of the other visitors to Hotevilla that somewhat marred my experience.  One man said repeatedly, “I have one of those,” as each Kachina appeared; others talked non-stop throughout the ceremony; and one couple pushed themselves forward to sit in the folding chairs that are reserved for local people.

In sharp contrast, the hospitality of the Hopi was heartwarming.  At this time, it is customary for Hopi families to invite friends, acquaintances and even strangers into their home to share in a meal.  I was fortunate enough to be invited into the home of Janice and Joseph Day.  The traditional Hopi food was delicious and people of a variety of backgrounds sat around the large table enjoying what Mrs. Day had prepared as well as the company.      Unfortunately, sometimes people have the impression that Hopi people are unfriendly and that complicated rules must be followed to visit the mesas or attend a Kachina Dance.  This is untrue.  The “rules” for visiting the Hopi Mesas are derived from basic good manners and simple common sense, which some people shockingly choose to ignore.  Signs that explain proper etiquette are posted at the entrance to each village.  During ceremonies, visitors should be as inconspicuous as possible.

Map of the Hopi Mesas

Visiting the Hopi Mesas is an honor, not a right, and witnessing one of the dances associated with the Kachina Ceremonies is a profound experience.  The katsinam first appear in physical form in December on Third Mesa; they arrive at First and Second Mesa in February at the Bean Dance.  Night dances take place until the end of March; these are followed by day dances from May until July when the katsinam return to Kisiau and Waynemai, their spiritual home at Nuvatukyaovi that non-Hopi call the San Francisco Peaks.  Social or non-kachina ceremonies, such as the Snake Dance and the Flute Dance, take place during the other months.

Visitors to the Hopi Mesas are struck by the fact that icons of American consumerism are conspicuously absent.  There are no malls or large shopping centers of any kind; no McDonald’s, Burger King or any other fast food franchise; no movie theaters.  Visitors may think that important aspects of modern life, which they deem essential, are lacking.  The Hopi feel differently.  They are extremely spiritual, non-materialistic and satisfied with their way of life.  We can learn much from them.

For more information on visiting the Hopi Mesas see below: