Although my collection began with pottery and I still consider pottery to be its heart I really had no idea what I was doing.  I was simply acquiring pieces haphazardly.   Eventually, I discovered Speaks of the Earth, a business run by Betty Johnston from her home in Sedona, Arizona.  Before long, Betty had become the first mentor for the collection.  Over the years, Betty suggested the work of a wide variety of artists, including Polly Rose Folwell.  I later learned that Polly Rose was not the only ceramic artist in her family, which piqued my interest.  I read as much as I could about all three of the Folwells and became determined to have work by all of them represented in my collection.  In my mind, acquiring their work became a quest and I came to think of Jody, Susan, and Polly Rose as the holy trinity of pottery although I had as yet to met any of them.

Although the work of Polly Rose was the first to enter my collection, she was the last of the three Folwells I met.  My first contact was with Susan and I clearly remember how the first piece by her entered my collection. 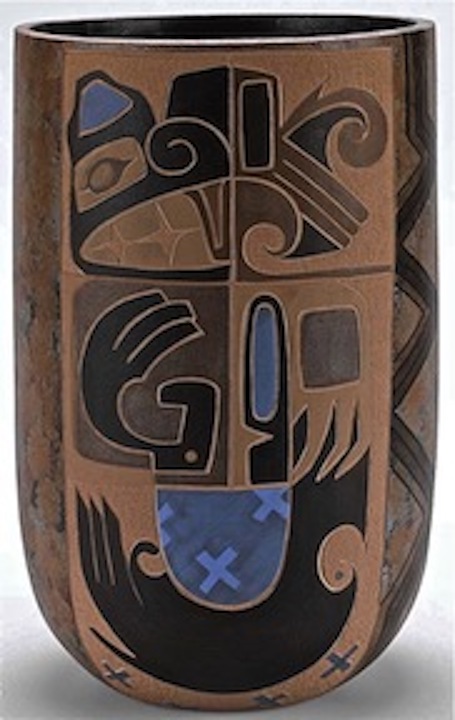 Uncharacteristically for me, I wasn’t on a quest, nothing was planned.  On a fall trip to Arizona I pulled into a parking space in front of the King Galleries (I’ve been known to drive there directly from the airport) and in the window, I saw a spectacular cylindrical jar decorated with Northwest Coast designs.  At the time, I had no idea who had created it though I did have my suspicions.  I was so taken with the piece that I decided on the spot that I would buy it even if I had to spend my entire collecting budget for the trip to get it.  Acquiring this piece didn’t break the bank and I have never regretted purchasing it.  As it turned out, this pot became the “star” of Forms of Exchange: Art of Native Peoples from the Edward J. Guarino Collection, an exhibit presented at the Frances Lehman Loeb Art Center at Vassar College in 2006.

Shortly after acquiring the Northwest Coast Cylindrical Pot I finally met Susan Folwell.  We have a similar sense of humor and a friendship was born.  When we get together we spend a great deal of time cracking wise on a variety of topics. 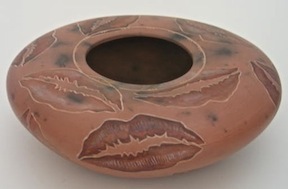 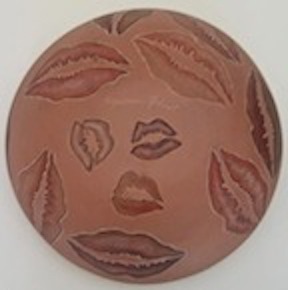 Susan often uses humor to criticize human foibles or to point out social or political issues, but at other times it is for sheer fun.  I remember how much we laughed when I acquired Untitled (Lips), a whimsical piece that still makes me chuckle when I look at it.  When I asked Susan the title she said, “It’s untitled.”  Then, after a moment or two of thought, she added, “Lips, I guess.”  We then spent the next ten minutes or so laughing as we competed to come up with the rudest alternative title.  It was a tie.

What makes this piece so appealing is the use of seventeen sets of lips in combination with an elegant form and muted coloration.  “I’ve been going through a body parts phase,” Susan commented at the time, “and lips are the fascination du jour.”  What cracked me up is what she said next: “I experimented, in the beginning, using wood stain to cover my own lips and stamp them on the bottom.  Realizing very quickly I was about to give myself cancer, I reverted to copying lips from the Internet.”  The thought of Susan Folwell repeatedly kissing the bottom of a pot to get the effect she wanted was just too funny and only something she would do.

Susan Folwell’s ability to move back and forth from one style to another with apparent ease and what seems like lightening speed continues to astonish me.  Her work is filled with so much wit, irony, elegance, humor, satire, and creativity that it continually enthralls me to the point that I now jokingly say that my home has become the Susan Folwell Museum. 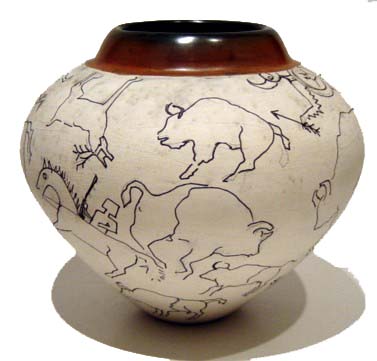 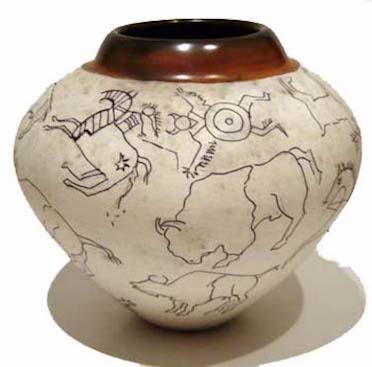 Jody used a white slip for the body of the pot, fired it, and let the ash from the firing process create a variation of colors.  The patterns encircling the piece are a series of buffalo and warrior figures. A few years after acquiring my first piece by Jody, I was introduced to her by Susan and I was immediately struck by her warm, welcoming manner, and willingness to talk about her art.  A year or so later I was invited to visit Jody and her family at her home.  At the time, I had no intention of buying any pottery.  However, I saw a piece that I thought was so exquisite that I inquired about it.  It was asymmetrical in that it had an uneven lip but, more surprisingly, it was a plainware pot that was covered in drips and splatters of red paint.  I commented that as soon as I saw it I pictured the artist gleefully walking around the piece with a paintbrush, flicking paint at it.  Jody said that was more or less how it happened.  She had just finished reading a book about Jackson Pollock and it just came into her head to decorate this particular work with spatters of paint.

However, what I remember most about that visit is Jody’s kindness.  I had just lost my mother a few months before and Jody sat with me on a couch, held my hand, and comforted me as we spoke about life, family, art, and many other things.  We must have talked for an hour about my mother and what she meant to me.

Jody’s pieces push the boundaries of ceramic art, challenging long held expectations.  Her work is consistently bold, daring, and breathtaking in its beauty and inventiveness.  Jody is a continual inspiration to collectors, curators, and, most importantly,  to younger artists, many of whom are in her own family.

Year after year, when I attend the Heard Market or the Santa Fe Indian Market, my very first stop is always the Folwell’s booth, not only to see what new and wonderful pieces they have created but to catch up on family news.  It was at such times that I often got to know a family member I had not met before. 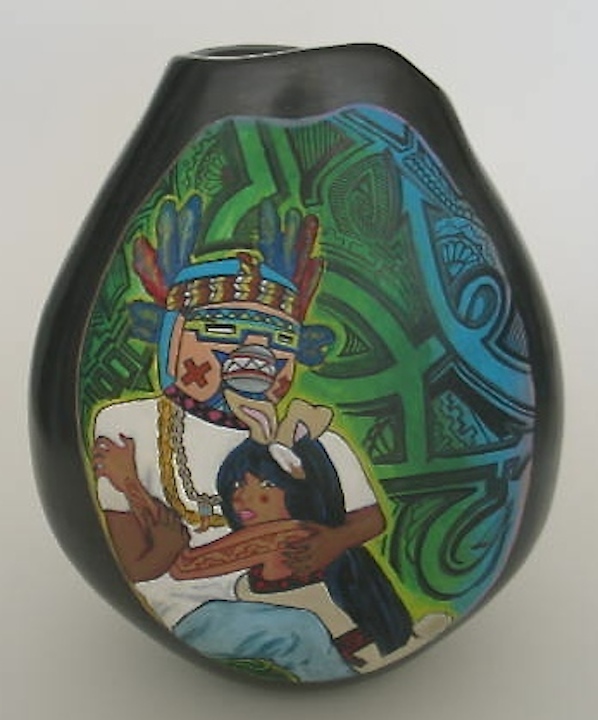 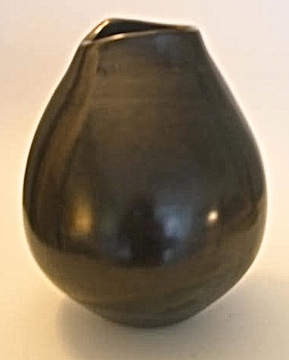 The first time I met Jody Kaa Folwell (usually simply called Kaa) was at the Heard Market.  I marveled that, although she would be standing all day on uneven ground, Kaa was sporting spiked heels.  In that respect, she reminded me of my own niece who also fancied herself a fashionista.  Kaa is Polly Rose’s daughter and she has not only been mentored by her mother, but also by her grandmother Jody and her Aunt Susan.  One could not ask for better teachers.

A few years later I marveled when I saw Dawnee Darko and Rez Bunny: Forbidden Love by Kaa and instinctively knew it was an important piece.   Kaa explained the title: “I spell it Dawnee because it rhymes with Pawnee even though the Pawnee Nation doesn’t have a belief system around katsinas . . . . It’s just the Native version in my mind of Donnie [Darko].  My grandmother has a Hopi katsina that I modeled the Dawnee mask after.”

When asked about the inspiration for the piece, the artist stated, “I was having dreams of my current boyfriend while I was in my previous relationship.  Neither of us acted on our feelings because my ex-boyfriend and my present one are friends so it was just a very taboo thing for us to have feelings for each other. . . . in Tewa belief women aren’t supposed to touch katsinas and vice versa.  Dawnee and Rez represent forbidden love . . . it’s the whole look but don’t touch the concept. “

The background is based on graffiti designs, adding to the tension of the piece.  “The background colors,” the artist continued, “also represent a lot as well.  The yellow and green are supposed to show how Dawnee and Rez admit light while together.  You can see blue fade into green, which represents the possibility of a fresh future . . . .”

Kaa clearly knew that her piece was controversial for a number of reasons besides the katsina and female embracing.  Rez Bunny sports a tattoo on her arm, something frowned upon by the elders of Santa Clara Pueblo.  “Both Dawnee and Rez” Kaa added, “are also bringing the traditional and the modern together.  You can see this with Dawnee’s attire and with Rez you see the pink lipstick and the red tattoo and nails.  The actual vessel can be viewed in two different ways: traditional and contemporary.  To get the traditional view, turn the side with the imagery to the wall.  I knew while I was building the pot that I wanted it to be versatile in viewing . . . . Again, this goes along with the new and old, the ‘traditional and contemporary.”  Although young, Kaa clearly has her own artistic vision.  I have enjoyed watching Kaa not only grow up, but also mature as an artist.  Kaa now has two children of her own.  Her older son Tonka is nine and has already tried his hand a pottery making. A piece by Polly Rose made circa 1989 entered my collection in 2004, but I did not meet the artist until 2019.  The pot I acquired has an asymmetrical lip and an abstract design.  Adding to the beauty of the work are the fire clouds, which create tones of black and brown.   Produced during the firing process, these irregular markings on the exterior of a ceramic vessel usually result from fuel (usually wood and/or manure) used during the firing process coming into contact with the piece during firing.  Such designs are basically dependent on the caprice of the fire.  Polly Rose created a highly polished pot with a rich burnt sienna color with the fire clouds adding to its beauty.  Because of its high burnish the piece is not only reminiscent of Navajo pottery, but also calls to mind the blush that is a characteristic of many Hopi ceramic works.  The pot is an elegant exploration of form, hue, and line.

I finally met Polly Rose at the 2019 Santa Fe Indian Market.  As usual, I spent a considerable amount of time at the Folwell’s booth catching up with Jody, Susan, and Kaa and watching Tonka (already quite the artist and businessman) run about.  Polly Rose sat, holding Kaa’s youngest son Amadee.  I sat down in a chair next to her and over the next half hour or so we talked about art, children, and family.  It was clear to anyone with eyes that Polly Rose adored her grandchildren.

When I first started collecting I only acquired historic pieces because Betty Johnston, my first mentor, was a traditionalist and I tended to follow in her footsteps.  However, when I saw the first installment of Changing Hands: Art Without Reservation, curated by Ellen Taubman and David McFadden the course of my collecting was forever altered.  Needless-to-say, the two subsequent exhibits in the series also introduced me to art and artists that were totally new to me at the time.  Because of those three exhibits, I became open to new perspectives in Native art, ceramics in particular.  If not for Changing Hands I doubt the work of the Folwells would be in my collection.  One of the great pleasures of collecting the work of living artists is getting to know the person who created the piece you have acquired.  Over the years it has not only been a pleasure to collect the work of Jody, Susan, Polly Rose, and Kaa Folwell but to get to know them and their extended family.