The term Inuit art encompasses a diverse range of media, subject matter, genres, and themes which, as a collector, continues to fascinate me.  I have been continually surprised to discover strange, surrealistic masterpieces among the early works and equally amazed by the explorations and experimentation of younger Inuit artists.

Inuit people have been creating art for more than 2,000 years.  The earliest Arctic people to produce a large amount of art was the Dorset culture (circa 600. B. C. – 1,000 A. D.).  These early works, usually small and easily transportable, were carved from bone, walrus ivory, drift wood, and stone.  Subject matter included land and sea animals, human figures, and maskettes, all believed to have had religious and shamanic significance.  The later Thule culture migrated from, what is today, Alaska around 1,000 A. D.  Considered the ancestors of the Inuit, this group either drove out or killed off the earlier Dorset people.  Although the Thule culture made small figurative art, it is most noted for graphic embellishments of everyday objects such as combs, tools, and gaming pieces.

Traditionally, the Inuit were a nomadic people.  However, around the middle of the 20th century they were faced with a severe famine when the elk herds, upon which they were heavily dependent, inexplicably changed there migration routes.  To stem the crisis, the Canadian Government decided to bring the Inuit off the land and into newly built settlements.  Once wholly self-sufficient, the Inuit people were now totally dependent on the government to meet all their needs.

What has become known as modern Inuit art developed out of this situation, when in 1949, John Houston, an artist and the Canadian government’s Northern Service Officer, purchased a number of small stone carvings from several Arctic communities and exhibited them at the Canadian Handicrafts Guild’s gallery in Montreal.  The response was enthusiastic.  Houston next turned his attention to printmaking.  He and a few Inuit men made a few experimental prints in 1957 and then, from November 1958 until February 1959, Huston  visited Japan to study the woodblock practice of Ukiyo-e, which involves an artist’s drawing being given over to a master printmaker to produce an edition of prints.  Returning to Cape Dorset, Houston shared what he had learned with Inuit printmakers.  Since wood is scarce in the Arctic, the Inuit replaced it with stone, thus creating the stonecut, which is a uniquely Inuit technique.  Over the course of more than fifty years a number of Inuit communities, such as Holman, Gjoa Haven, Baker Lake, Arviat, Puvirnituq, and Pangnirtung, have produced art.  However, it is Cape Dorset that has continually produced high quality art.  In addition to sculpture, the community has produced an annual print collection that, in addition to stonecuts, includes other printmaking techniques such as etching, engraving, woodcut, linocut, stencil, lithography, aquatint, collagraph, and sugar lift.

In almost twenty-five years of acquiring Inuit art, I have collected works  that include a wide range of genres, such as scenes of daily life, landscapes, still lifes, and portraits, as well as a variety of artistic styles ranging from representational to abstract.  However, I am particularly fascinated with what has become known as the Inuit Surreal, an aspect of Inuit art that has been largely overlooked because so many works have been given titles that lend themselves to an anthropological or ethnographic rather than artistic interpretation.  It should be noted that Inuit artists rarely title their drawings.  In most cases, it is gallerists who do so, bringing with them their own cultural biases.  Prints, on the other hand, are titled by the co-ops.  From its inception, a surrealistic strain has run through Inuit art and continues to do so.

Inuit artists were not influenced by European Surrealists.  It was, in fact, the other way around.  Max Ernst, AndréBreton, Roberto Matta, Enrico Donati, Dorothea Tanning, Georges Duthuit, Robert Lebel, and Claude Levi- Strauss were so impressed by Arctic art that many of them became collectors, in particular of Yup’ik masks.  The European Surrealists saw in Inuit artists kindred spirits who employed dream imagery drawn from the human subconscious.

The Surrealists, were fascinated by the multiple perspectives, distortions, emotional intensity, and seeming spontaneity found in much of Inuit art.

One of the first Inuit sculptures I acquired was Transformation Spirit by Eli Salualuk of Povungnituk, which is located in Canada’s North West Territories.  Although I had been collecting Inuit sculpture for three years, I had not seen anything like it and asked the gallerist who sold it to me if the artist had been influenced by surrealism or, perhaps, Picasso.  She assured me that the artist hadn’t even heard those words.  Despite it’s title, by any definition Transformation Spirit is a surrealistic work.

An early untitled print by Johnniebo Ashevak typifies what has come to be known as the Inuit Surreal.  Artists were told to put on paper whatever came into their head.  Some created works that portrayed life as it was once lived on the land; others produced images of iconic Arctic wildlife.  However, a number of pieces had a strange, dreamlike quality.  In Johnniebo Ashevak’s print, an unearthly creature resembling a merman is surrounded by nonrealistic renderings of Arctic animals, giving the piece a phantasmagorical quality.

Mother and Children, a print produced by Pitseolak Ashoona in 1962, seems at first glance to be a portrait of a woman holding her two offspring but the title is misleading. On closer inspection, the mother, whose mouth is twisted in what could be a smile or a scream, is struggling to hold on to her two children who appear to be only part human. Their lower bodies are covered with fur, which may or may not be clothing. There is a deliberate note of ambiguity in the imagery. Is the work a representation of shamanic transformation or a wry comment on motherhood? Perhaps it is both.  Adding to the surreal quality of the work is the fact that the figures seem to “float” on the page.

At first glance, Untitled (Three Animals), a print produced by Pitseolak Ashoona in 1962, seems to be simply a representation of Arctic wildlife.  However, upon closer inspection quite a bit more is revealed.  Not only do the animals portrayed appear to float on the page, they are, in fact, quite strange.  The bird on the right stands upright, its wings oddly thrown back, and it has what appears to be hair on its head.  The owl, the central figure, has a boldly human stance and stares directly out at the viewer.  The most bizarre of the three is what looks like a seal but, unlike any in Nature, has a large beak.  Pitseolak has created a work that is surreal, disturbing and somewhat humorous.

An untitled etching by Kenojuak from 1962 also typifies the artist’s surrealist bent.  The imagery consists of an owl, a fox, another bird that is most probably a goose, and a walking head, a strange being from Inuit folklore.  This head with arms and legs appears to be standing on the owl’s back and it is only this odd creature and the owl who look directly out from the page, confronting the viewer.  Although the animals in the print would be familiar to the artist, this work was clearly never intended to be a simple representation of Arctic wildlife.  The two figures that boldly meet the viewer’s gaze evoke a dreamlike quality, especially since one of them is a disembodied head.

In Untitled/Bird Spirit (aka Birds and Dogs) also produced in 1962, Kenojuak created an image that is both dreamlike and nightmarish, consisting of an amorphous hybrid of two dogs and an oddly winged bird combined with two other, more clearly defined images of a bird of prey (a hawk or an eagle) and that of  a bird (most likely a loon or a goose).  Although the print alludes to the Inuit concept of transformation it functions on a much deeper level, taking the viewer into the realm of the subconscious.

Quite a number of Kenojuak’s prints are decidedly strange.  Ravens Entwined is one of her most spectacular works in this vein.  Consisting of a group of disembodied raven’s heads whose exaggerated necks are entwined, the print is unique among Inuit graphic art.  Rather than portraying the birds‘ natural black coloration, Kenojuak chose to create a rainbow of ravens on a white page by employing blue, purple, yellow, orange, pink, brown, and black.

In stark contrast, Arnaqu Ashevak’s Untitled (Man and Bees) shows a nude, hairless male being attacked by larger than life bees giving the work a surrealistic aspect.  Reminiscent of the torments inflicted by the Furies in Greek mythology, the black and white drawing may reflect the suffering that comes to all humans and may have been inspired by the swarms of insects that plague inhabitants of the Arctic during the warmer months.  Ashevak was a complex modern artist who takes inspiration from a variety of sources to examine the human condition – photographs, television, movies, art history, nature, local events, and art history  – while drawing from his own Inuit culture.

Ningeokuluk Teevee, one of Cape Dorset’s rising stars, is becoming known for her sometimes biting sense of humor.  She not only has a strong graphic sense, but also has a talent for presenting traditional aspects of Inuit culture in her own unique way.  Hers is a decidedly contemporary sensibility. This is obvious in Many Eyes, an unconventional drawing with scores of eyes in varying sizes staring back at the viewer.  The humor of the piece is disconcerting since it makes us wonder who or what, for that matter, is looking back at us, which gives the work it’s surrealistic tone. 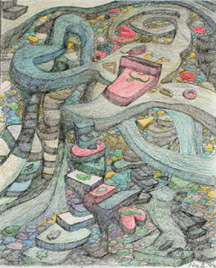 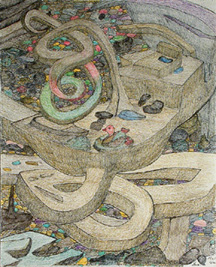 Known for her dark (some might say twisted) sense of humor, Shuvinai Ashoona has staked out a territory that is all her own.  There is no other Inuit graphic artist who produces imagery quite like hers.  Shuvinai’s work is complex and highly detailed.  Often, she creates fantastical landscapes that seem to have emerged from the mind of Rube Goldberg but much of her work is filled with her unique sense of humor.  Her  phantasmagorical landscapes, highly sought after by collectors, create a surreal world unlike that of any other Inuit artist.

In David Divincheke 2008 June by Shuvinai Ashoona it is clear that the artist has been exposed to the work of Michelangelo.  However, though the David is the inspiration for the drawing it is merely a starting point for a modern artist’s unique vision.  Besides the nude Biblical male, Shuvinai has added a number of her own colorful, charming, and perplexing touches.  In general, Shuvinai’s work tends to be dark and humorous, often containing idiosyncratic symbols that clearly mean something to the artist but often defy interpretation.  By juxtaposing the familiar, the David, and the bizarre, the tree with its dangling oddities, the artist creates a disturbing sense of disorientation in the viewer.  What it all means is anybody’s guess but it is certainly quite wonderful to contemplate.

Saimaiyu Akesuk takes surrealism to the extreme in Qaumajaq (Fly).  It is a work in which the artist increases our revulsion for this insect by magnifying it a thousand fold.  As much as most people despise flies, they are more than just an minor annoyance in the Arctic when they descend by the millions to plague both humans and animals.

Inuit Surrealism is not based on a European model.  Rather, it draws inspiration from a unique culture.  Historically, shamanism, transformation, and multiple perspectives have all been a part of the Inuit world view.  Although a decidedly surrealistic vein runs through modern and contemporary Inuit art, it is often overlooked because it is interpreted through an anthropological or ethnographic lens.  The Inuit surreal is a fascinating aspect of Inuit art that is deserving of more attention by curators and collectors.