Daryl Candelaria is one of the few potters working at San Felipe Pueblo.  He studied both historic and contemporary pottery at the School of American Research in Santa Fe, NM.  This jar is a more traditional bowl. The interior and exterior are polished and then painted. The inside has a fish and water designs. The exterior has rain designs.   It is signed on the bottom, “Daryl Candelaria” and it is in very good condition with no chips, cracks, restoration or repair. 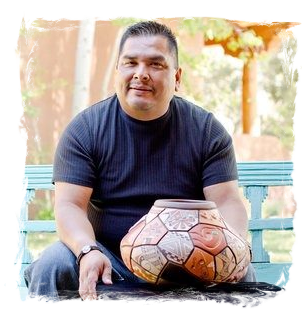 Daryl Candelaria is one of the few potters from San Felipe Pueblo. He learned to make pottery from his mother, Sara Candelaria. Sara learned to make pottery from her mother, Juanita Toledo (Jemez), who worked with Evelyn Vigil to revive Pecos pottery. Daryl studied the pottery at the School for Advanced Research, to better understand the pottery of San Felipe Pueblo. Daryl’s extensive research forms the inspiration for what he calls his “shard” pottery. His distinctive technique involves depicting numerous individual pottery designs from different pueblos and Native cultures on a single pot. The clay between individual designs is then deeply carved to create the appearance of a pot composed of separate "shards." Design elements range from pre-contact to contemporary motifs. Daryl says, “Art and pottery, I believe, like any form of art, are always evolving. You don't want to settle on a set style, and it gets stagnant after a while … With my creativity and pushing the envelope and saying ‘What else can I do that I can accomplish, and people will like?’ So in a way it's progressive, I would say… Creativity is endless, and there are always different possibilities, and it's just something that I envision and look forward to in my work.” He has won numerous awards at Santa Fe Indian Market, Eight Northern Indian Market, and his work can be found in the collections of the Denver Art Museum the Indian Pueblo Cultural Center and MIAC. Daryl's hallmark is a stylized water serpent, a symbol of his Keres name, which he often incorporates into his pottery designs.