This tall jar is made from micaceous clay.  It has 16 melon ribs pushed out in the clay. The jar is an interesting shape with a square shoulder  The rim is fluted with an undulating shape. The jar was traditionally fired so there are blushes on the surface.  Joel’s pottery can be found in museums such as the IAIA Museum, the Boston Museum of Fine Arts/Peabody Essex and the Heard Museum.  The piece is signed on the bottom in the clay, “Joel McHorse”.  It is in excellent condition with no chips, cracks, restoration, or repair. 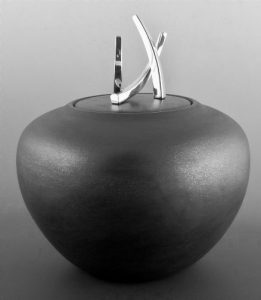 Joel McHorse (b.1969) is a son of renowned potter Christine McHorse. He learned to make pottery from his mother and in the 1990s. His early work was a combination of traditional Navajo shapes and incised designs along with his own distinctive silverwork that he used as finials on the lids. He took nearly a decade away from the clay to become an architect. Joel said of his early work, "The successes of form and composition that I see in my pottery I try to utilized in my architecture." The opposite could be said today as the success of his architectural career has created a new direction in his work in the clay and especially in silver. Joel's pottery can be found in museums such as the IAIA Museum, the Boston Museum of Fine Arts, Peabody Essex, and the Heard Museum. His work is unique and timely and definitely a potter to watch.