Scott, Rain – “Handling the Past” Origami Jar with Handles

Rain Scott is the son of jeweler Raynard Scott (Navajo) and a descendant of Marie Z. Chino of Acoma.  He says that growing up in Arizona, he wanted to learn to make pottery but didn’t have anyone to teach him.  In 2011 he began working with origami, the art of creating objects with folded paper.  From 2013 to 2018 he experimented with the art form and in 2018 made his first vessel, an Acoma jar.  He calls his style, “contemporary indigenous origami”.  Each piece is made from thick paper and creates a corrugated texture.  This piece is entitled, “Handling the Past.  Rain says that it was the first time he has made a piece with handles. The vessel is made using three different colors of paper.  He says of this piece, “This is my newest vessel.  It has a starburst pattern. The swirls on the sides are inspired by Pima baskets and how the baskets pay homage to water and water is life.”  It is a striking piece in color and design.  There are thousands of pieces of paper used to make this jar! The piece is signed on the bottom, “Rain Scott”.  It’s exciting to have such innovative work in the gallery.

“I call my work contemporary origami pottery.  I came up with them as I wanted to learn to make traditional pottery.  I never had a teacher to show me how to get the clay or slips.  I was always creative with paper.  I started out with swans and then one day wanted to see how I could make a vase.  It took a lot of experimentation”.  Rain Scott 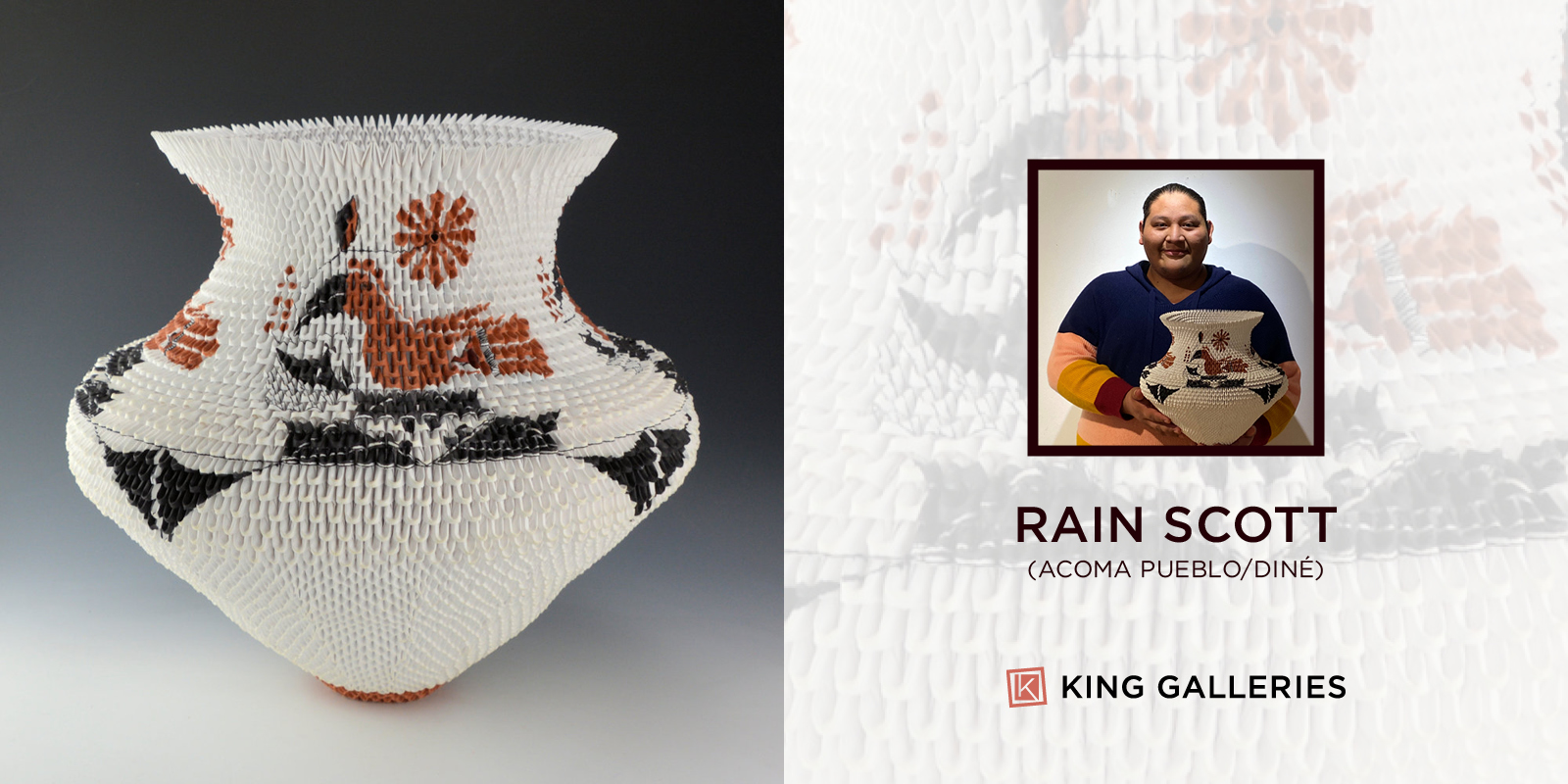 Rain Scott is half Navajo and half Acoma. Growing up, he would watch his father, Navajo silversmith Raynard Scott, make countless jewelry pieces out of silver, turquoise, and other precious gemstones. His upbringing sparked a passion for art, taking a particular interest in painting and still life drawing. In 2011, he developed a new interest in Japanese origami art and traditional Acoma Pueblo ceramics. For the next couple of years, he tried and failed to find a teacher to teach him the traditional art form of Acoma pottery. Instead of giving up on his aspirations, he called upon his talent for origami art and knowledge of conventional Acoma pottery designs. As a result, he created an entirely new style of Native American art.

From 2013 to 2018, Rain experimented with his newfound artform. He sculpted simple peacock and swan forms, ultimately winning a youth award in the 2014 Heard Museum student art show. In 2018, he cut his first contemporary origami vessel in the shape of a white corrugated Acoma pot with a rounded shoulder and a short neck and finished with a simple black rim. Thus, his art form was born.

Since 2018, Rain Scott has combined the traditional Acoma Pueblo pottery designs with individually cut and folded origami modules into an art form that he calls “contemporary Indigenous origami.” The thick, sturdy walls and corrugated texture of his origami pottery make every piece pleasing to the eye and gratifying to touch. He pushes the boundaries further with every art piece he creates, incorporating new designs, shapes, colors, and components, including parrot feathers, turquoise, and natural sinew. Rain Scott’s creations have been awarded many awards at juried art shows in the Southwest, including the 2020 Alan Houser Innovation Award at the Heard Museum Guild Indian Fair and Market.