Jacquie Stevens is best known for the simple use of forms on her pottery.  Over the years she brought an unexpected dimension to Native pottery with her immense, undulating vessels. Her Winnebago (Ho-Chunk) ancestry inspired her to add basket weaving and other materials as embellishments to her undecorated forms. Her aesthetic of the organic challenges the symmetry of Pueblo pottery and provides a provocative glimpse into the future of Native pottery.  This jar is one which she used to call her “Bag” jars. The form is reminiscent of a bag with asymmetric sides and opening.  The rim has holes and it is laced with leather, beads, and a shell.  The idea was as if this was leather and not clay and you could simply pull the leather and tie up the bag.  It is a really creative idea which she handled perfectly. This jar is made from white micaceous clay.  It is thin-walled with a high shoulder and asymmetric rim.  The mica gives just the right amount of reflection in the light.  There are abalone additions to the leather.  The piece is in excellent condition with no chips, cracks, restoration, or repair.  It is signed on the bottom in the clay, “Jacquie Stevens”. 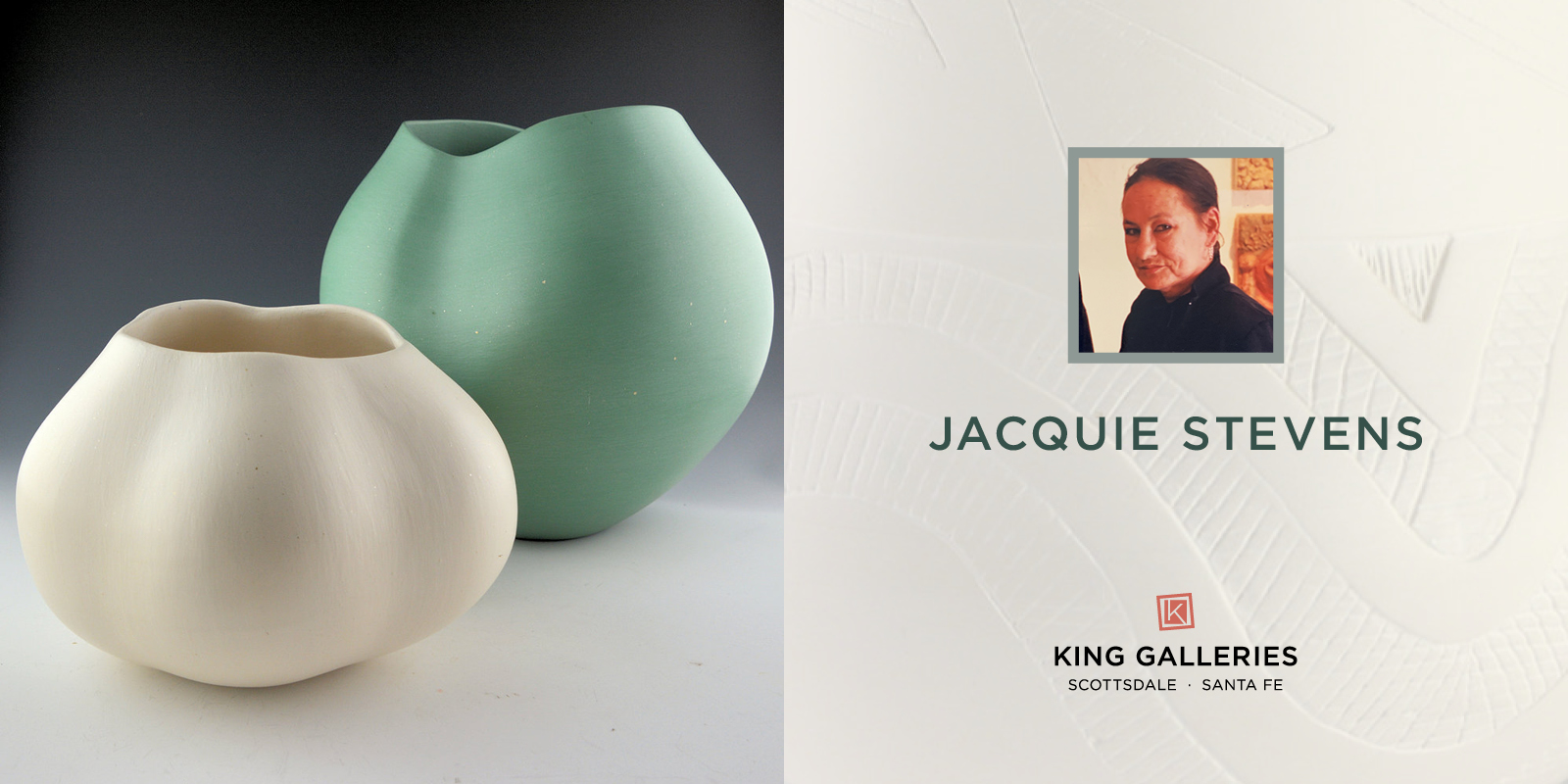 Jacquie Stevens is known for unique pottery, which often combines the clay with fiber, wicker, and stone. She was born in Omaha, Nebraska, and raised by her grandparents on the Winnebago Nebraska Reservation, seventy-five miles north of Omaha. In 1837, Winnebagos came from Wisconsin to the Nebraska reservation. Later, in the 1880s, some returned to Wisconsin. There, basket making was more prevalent than in Nebraska, because the women could find better material for weaving in the Wisconsin woodlands. But Jacquie remembers that her grandmother made beautiful baskets in Nebraska. Jacquie learned to make pottery when in 1975, she attended the Institute of American Indian Art and studied under Otellie Loloma, the well-known Hopi potter and teacher. Jacquie said of the experience, “It must have been fate that made me take a class taught by Otellie. It was like I returned home; clay became my expression. Otellie taught me that each pot has its own life, personality, character, and form – and that is what set me free. Pottery is like people, and each one is different and not perfect. I thought about this and decided it was an important idea. So I developed a new way, an unconventional way of looking at the form.” Jacquie has won numerous awards for her pottery at Santa Fe Indian Market over the years.