Jacquie Stevens is best known for the simple use of forms on her pottery. Each piece was coil built and a creative combination of form and technique.  One of her most famous creations where her clay bowls with a woven basket rim.  The large bowl is made from white clay.  The exterior is smooth while the interior has a swirl design impressed into the clay.  The rim of the bowl has holes into which a basket is woven.  The weaving of the basket is not only visually striking but inspired by her Winnebago ancestry.  The large scale of this bowl, combined with the interior design and basketry, is stunning!  The piece is in excellent condition with no chips, cracks, restoration or repair.  It is signed on the bottom in the clay, “Jacquie Stevens, 2002”.

“The ceramics of Jacquie Stevens are to the casual observer beautiful, lyrical ware, but on a more subtle level, they are often subliminal statements about sensuous shapes, and the texture and volume of the human body—in an age when television advertising (not figurative painting or sculpture) has capitalized most powerfully on people’s love of and need for the truly human in their lives. Stevens’s work is also intellectual, playing on the ceramic traditions of potters from all over the world. Even when she is not working metaphorically, the artist’s involvement with texture, whether it be of scored clay, embellishments of beads, or the smoothness of hides, is her hallmark.”  Spoken Through Clay” 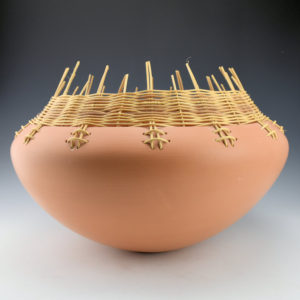