This is a large storage jar-shaped vessel by Margaret Tafoya. It is one of few carved melon jars she made in the 1960s.  There was a swirling rib one that was featured in my book, “Born of Fire”.  This is only the fourth melon ribbed jar I have seen of hers at this size, including one that is in the permanent collection of the Heard Museum.  This jar is one of Margaret’s classic shapes with a high shoulder and slight neck.  However, what makes this very unusual besides the size, is the surface, which is designed with a series of melon ribs.  There are 12 ribs carved into the clay.  There is a striking symmetry to each of the ribs and the recessed area between them.  The ribs actually create a lot of additional surface area for polishing.  This jar is fully stone-polished.  The plainware vessels are always among the most difficult to polish, as they must be fully polished at one time or the slip will dry.  Margaret did not make many of these melon rib jars at this size.  The jar is in very good condition with no chips, cracks, restoration or repair. The jar is highly polished and traditionally fired.  It is signed on the bottom in the clay, “Margaret Tafoya”.  Definitely an iconic piece of her pottery!

Margaret Tafoya is a daughter of noted potter Sara Fina Tafoya and a sister of Christina Naranjo and Camilio Tafoya.  She is the matriarch of a family of renowned potters, each of whom created their distinctive styles.  Margaret Tafoya had twelve children, eight of whom became potters.  They include Virginia Ebelacker, Lee Tafoya, Toni Roller, LuAnn Tafoya, Mela Youngblood, Jennie Trammel, Mary Ester Archuleta, and Shirley Tafoya.  Her grandchildren, and today even her great-grandchildren, carry on the pottery-making tradition.

Margaret Tafoya was a guardian of traditional pottery-making methods and techniques.  She created large vessels with stone polished surfaces. Her carving was done before the piece was polished.  She produced her work from the 1920s through the 1980s. Margaret Tafoya won numerous awards throughout her career, including Best of Show at Santa Fe Indian Market in 1979 and 1980. She was also awarded the Heritage Fellowship from the National Endowment for the Arts in 1984.

The book, “Born of Fire,” follows her life and art over the many decades.  It is also the only book to identify her pottery by the decade produced by using the variations in her signature.  This book is the first complete biography of Margaret Tafoya’s life. It is divided into decades, giving the reader a deeper understanding of her life and pottery over nearly 100 years. There are new biographies on Virginia Ebelacker, Richard Ebelacker, Lee Tafoya, Linda Tafoya, Jennie Trammel, Mela Youngblood, Nathan Youngblood, Nancy Youngblood, Toni Roller, Jeff Roller, LuAnn Tafoya, Daryl Whitegeese, Mary Ester Archuleta, and Shirley Tafoya. The photography of the pottery in this book is exceptional. Throughout the book, personal narratives by family members and family photographs create a wonderful sense of her humanity and artistic accomplishments. 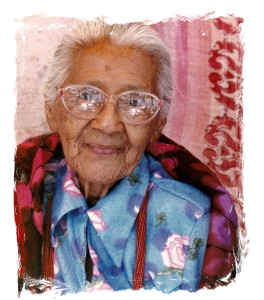