This is a classic wedding vase by Sherry Tafoya.  It is coil-built and carved with a bear paw on one side.  Inside the bear paw are prayer feathers.  The remainder of the piece is fully polished.  It is fired a deep black.  The complexity of her designs is certainly reminiscent of the work of her aunt, Teresita Naranjo. It is signed on the bottom, “Sherry Tafoya”. 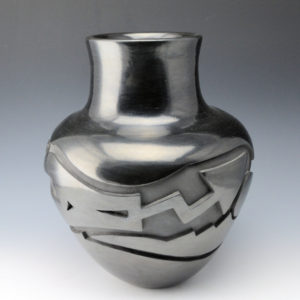 Sherry Tafoya (b.1956), from Santa Clara Pueblo, is a granddaughter of noted potter Christina Naranjo, a daughter of Mida Tafoya and a niece of Teresita Naranjo and Mary Cain. She is known for her large vessels and complicated designs.  Sherry Tafoya was included in the original "7 Families in Pueblo Pottery" exhibit in 1974.  And she uses the traditional methods of hand coiling and shaping the pot, sanding, fine clay application then stone polishing before traditionally firing her works.  Her deep carved designs and exceptional polish are characteristic of her family tradition, but she has a specific fullness in designs that reflect the contrast of color, depth, and polish.