Jason Wesaw is Potowatomi and from the Great Lakes area.  Each piece is handmade and the simplicity of forms reflects modernism with the context of his art. For his pottery, he uses glazes, underglazes and the top of the lid is a dyed deer tail.  The shapes are simple but with thoughtfulness in the content of the design.  This jar is entitled, “Blue Jay”.  There is a single painted blue jay as the design with silver luster geometric surrounding shapes.  It is signed on the bottom with his turtle hallmark.   Jason has won numerous awards for his pottery and paintings.  He is a creative force in Native art and we are excited to have his work in the gallery.

He says of his pottery,

“My work fits somewhere in between this deep connection to the land and the searching for spirit that resides within all things.  This life-force reveals itself to me in bold colors, simple patterns, and straight forward forms.  The vessel is important, in the sense that it acts as a body from which the spirit comes.  But, my forms are decidedly simple and upright.  The deer tail ornamentation of the lidded forms is the physical ‘emergence’ of this spirit.  Each vessel, drawing, or textile is my re-interpretation of an old story, an observation of our connection to the natural world, or a confirmation of the deeply spiritual essence of all things in the physical realm of life.” 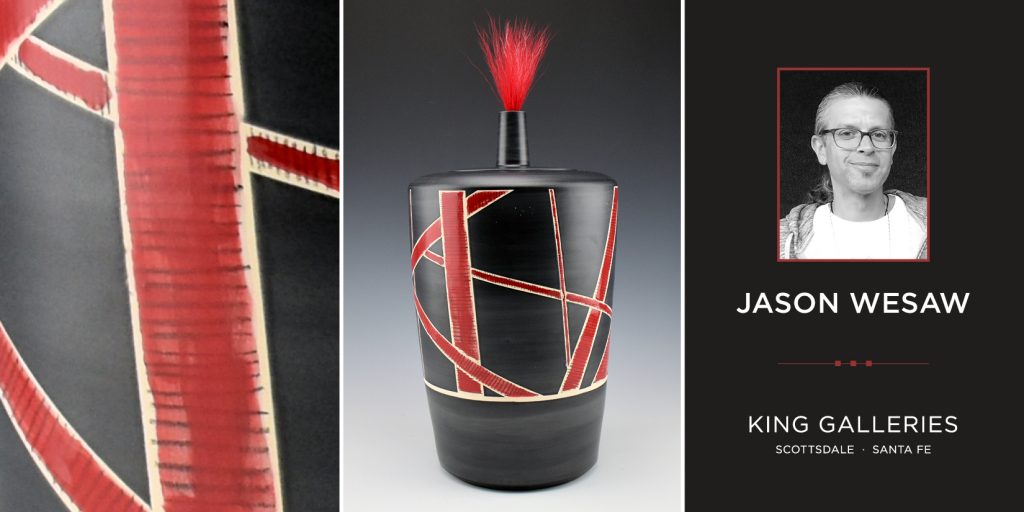 Jason Wesaw has always been an artist, exploring his creativity through photography and music. But in recent years, he has found new influences from his Pokagon Band of Potawatomi heritage. This has led him to work with clay where he has been searching for a traditional approach on his own. There are no strong traditions of working with clay among the living members of his tribe, but he believes there is a connection that he is working to rekindle.   “I have harvested clay from near Lake Michigan, and I am able to give a voice to that material.” Jason’s father is Potawatomi and his mother is European so he is a product of two cultures. But he is drawn to the Potawatomi culture in many ways and has begun working as a cultural associate for the Potawatomi Band. His native heritage has become a strong part of his life and his artistic inspiration.